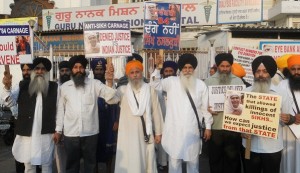 Jalandhar,Punjab: Slamming Indian system for failing to prosecute high and mighty perpetrators of Nov 84 carnage, the Dal Khalsa has called upon the UN to intervene for the sake of justice.

The organization along with another like minded bodies today squarely blamed the Indian system for bitterly failing to deliver justice to victims of Nov 1984 massacre of Sikhs even after 28 years of its occurrence. While judicial process has began to show some results in bringing the perpetrators to book in the cases of innocent killings of Muslims in Gujarat 2002, there has been no sign of justice in the case of mad violence against the Sikhs.

The organizers were categorically of the view that how can Sikhs expect justice from that state, which allowed the killings of innocent Sikhs.

Hundreds of activists associated with party’s youth wing named ‘Sikh Youth of Punjab’ led by its president Ranbir Singh today held a demonstration protesting against the carnage and denial of justice. They gathered at city’s busiest chowk to convey their concern and message to passerby.

Earlier, they performed Ardas at local gurdwara to pay homage to those who became victim of “politics of genocide played by Congress with the active connivance of state administration.

“killings in Nov 1984, were not riots but genocide. To draw attention of the people, they had a long banner on which it was written “The state engineered the Nov 84 genocide, who will book the state. UN should intervene”.

Addressing the protestors, the leader of the radical party Harcharanjit Singh Dhami said the justice was still a far cry. He said so far, by all standards, the international community has let down the Sikh people. Through its missions in Delhi, the UN and the five permanent members of UN Security Council was witness to the black days of November when Sikhs were slaughtered, maimed, women dishonored and children orphaned. “To the best of our knowledge, no official statement or record exist admonishing India’s poor political and police governance during that particular period”.

While talking with media party spokesperson Kanwar Pal Singh said howsoever late it may be, we still seek world powers intervention and influence on India to punish the guilty. The UN should investigate the role of then Prime Minister Rajiv Gandhi and Home Minister P V Narsima Rao in absentia for allegedly engineering the massacre.

The poster titled “Who is guilty” addressed to the civil society was distributed to all passerby. The questions were raised that includes “do you know about the barbarism of the Congress, the RSS and hooligans of Delhi? Is India a civilized society? Is India a secular country?