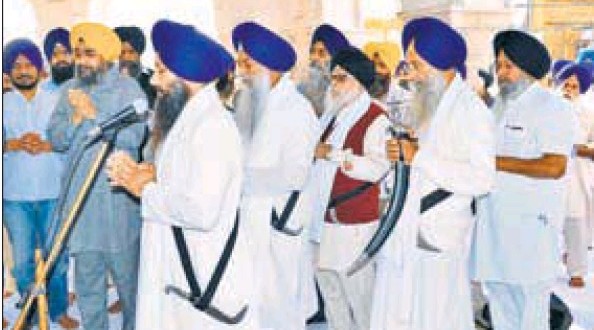 Amritsar, Punjab: Akal Takht Jathedar Giani Gurbachan Singh led the Sikh community in offering prayers at the Golden Temple in memory of those killed in the Sikh genocide of 1984.

He categorically demanded that the Modi government punish those responsible for the brutal murder of Sikhs under a well-planned conspiracy by the then central government.

“No doubt the Modi government has announced a compensation, but more important is justice for the families who lost their near and dear ones. Justice is important as the genocide were executed to teach a lesson to the Sikh community,” stated the Jathedar, while addressing a gathering during the prayer ceremony held at Gurdwara Jhanda Bunga Sahib in the Golden temple complex here on Sunday.

The Jathedar dwelt on the efforts made by the Shiromani Gurdwara Parbandhak Committee (SGPC) in pursuing the genocide cases in the courts of Delhi. He specifically referred to the cases against Congress leaders Jagdish Tytler and Sajjan Kumar and said it was due to the efforts of the SGPC, that the cases against these two leaders had reached the courts. “The SGPC will continue its efforts in pursuing the riot cases till justice is delivered to the Sikh community,” he said.

Prior to the speech, ‘ bhog’ of the ‘ akhand paath’ was performed and ‘ ardas’ was offered in memory of the victims.