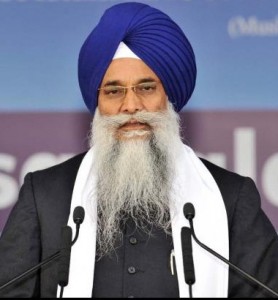 Amritsar, Punjab: Akal Takht Jathedar Giani Gurbachan Singh’s issuance of edicts and even the excommunication of three Sikh leaders from Haryana drew criticism at a seminar on Sunday.

The Panthic Taal Mel Sangathan, headed by former Takht Damdama Sahib Jathedar Giani Kewal Singh, had organised the event. The group comprises several Sikh organisations besides some religious scholars. Giani Gurbachan Singh had also been invited, but he preferred to stay away.

Giani Kewal Singh said, “Recent developments have led to disillusionment among the Sikh masses. Even the edicts issued by the Akal Takht were not taken seriously and have been violated.”

“A jathedar will find it difficult to displease those who are behind his appointment,” he claimed. Shiromani Gurdwara Parbandhak Committee (SGPC) member Hardeep Singh Mohali also said that the procedure of selection, appointment and removal of the jathedar needed to be changed. A couple of speakers claimed that the Akal Takht Jathedar often took important decisions at the behest of the Shiromani Akali Dal (SAD), which controls the SGPC, the appointing authority.

Akal Pukh ki Fauj advocate Jaswinder Singh claimed: “Today, a large number of Sikhs have reservations over the functioning of the Akal Takht Jathedar. There should be an advisory board to advise the Jathedar on important issues.”

At the end of the seminar, a resolution was adopted that called for forming a committee comprising representatives of select Sikh religious organisations and Sikh scholars for giving shape to the procedure of selection of Akal Takht Jathedar. Till the formation of this committee, the Panthic Taal Mel Sangathan announced the formation of a 13-member committee headed by Giani Kewal Singh to work towards strengthening ‘Panthic Ideology’ and ‘Panthic institutions’.

Another resolution called for the ‘social boycott’ of Giani Iqbal Singh, a former Jathedar of Takht Patna Sahib for having attended a Vishav Hindu Parishad (VHP) meeting at Patna. The resolution appealed to all Sikhs not to maintain any form of relations with him.