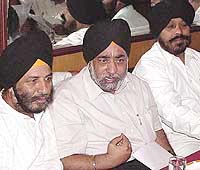 Ludhiana, Punjab: The 1984 Genocide victims will gherao the Justice TS Doabia Commission, appointed by the Delhi Sikh Gurdwara Management Committee (DSGMC) to probe the incidents of violence due to the congregation of religious leader Ashutosh, during its visit to Ludhiana on December 19. The president of the DSGMC, Paramjit Singh Sarna, had appointed the commission for a probe into the police firing on protesting Sikhs on December 5.

Taking a dig at Sarna, the president of the Danga Peerat Welfare Society, Punjab, Surjit Singh, said the DSGMC president was a ‘Congress agent’ while trying to portray himself as a sympathiser of Sikhs.

“When he is so close to the Congress, a party known for unleashing terror again Sikhs during the 1984 riots, how can he call himself a sympathiser of this community? We will not be taken in by his attempts to befool us,” said Surjit Singh.

Addressing the press conference, Surjeet Singh, president of the society, said, “To appoint a commission like this is mere a drama by DSGPC. We will gherao the commission on its visit to the city on December 19 and ask Paramjit Singh Sarna, president of DSGPC, as to what is common between him and Congress party?

The riot victims questioned Sarna about the authority under which he had constituted a commission led by a retired judge.

“What is his authority to do so? It is for the government to see,” they said. “It is strange that he is making noise over a Sikh killed here while he did not do anything for hundreds of Sikhs who were tortured and killed in riots,” said Surjit Singh.

Recalling that Sarna did not allow the victims to organise ‘akhand path’ at a gurdwara in Delhi on the 25th anniversary of the riots, Surjit Singh said he honoured Delhi Chief Minister Shiela Dikshit.

The victims accused Sarna of enacting a drama prior to SGPC elections to affect the mandate against the Shiromani Akali Dal.