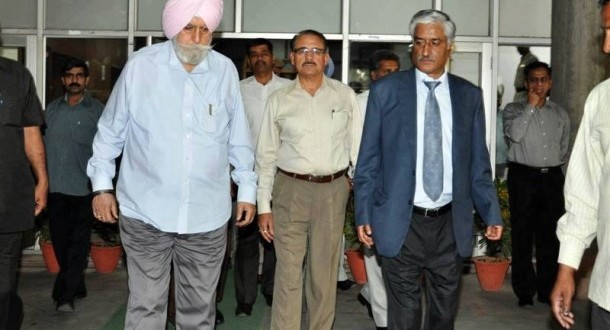 Sumedh Saini on the right side with his old boss and mentor KP Gill.

Comments Off on Sumedh Saini removed by Badal on the advice of BJP Union Home Minister 1,849 Views

Chandigarh, Punjab: Punjab Police chief Sumedh Singh Saini was on Sunday shunted out of the position by the state government. He was replaced by Suresh Arora as Director-General of Police, Punjab. The move has reportedly come at the intervention of the Union Home Minister, who had last week spoken to Chief Minister Parkash Singh Badal about the developments in Punjab in the wake of incidents of desecration of ‘birs’ of Guru Granth Sahib.

“Saini has been transferred,” Punjab Home Secretary Jagpal Sandhu said, adding that he was given the new charge as Chairman of the Police Housing Corporation.

Arora, a 1982-batch IPS officer, was serving as the Director-General of Police-cum-Chief Director, Vigilance Bureau.

Under intense pressure to solve the incidents of desecration, especially the one at Baragri village in Faridkot, the Punjab Police had claimed to have found evidence to suggest an ‘international conspiracy’ behind the sacrilege. The police had also arrested two brothers, Rupinder Singh and Jaswinder Singh of Panjgarayin village in Fardikot, for their alleged involvement in the Bargari incident.

The police theory, however, came under attack from several quarters, especially Sikh leaders and residents of Panjgarayin village. They claim the two had been sent money for treatment of injuries. Protests against the sacrilege have continued in the state, but have now turned more against the arrest of the two brothers.

The state police have also been attacked for not being able to solve the case when the ‘bir’ was reportedly first stolen in June. Subsequently, during the protests against desecration, tempers were particularly frayed when the police opened fire at protesters at Behbal Kalan village in Faridkot, which left two persons dead and more than 90 injured. The protesters were sitting on a dharna peacefully and were reciting morning prayers when policy started firing unprovoked.

Union Home Minister Rajnath Singh spoke with Chief Minister Parkash Singh Badal and assured him of “all possible help” from the Centre to tackle the situation. He promised all help to defuse the tension in the state.

The Congress and most of the Sikh organisations were against Saini holding the post of DGP. However, Sikhs are equally against the new DGP as his hands are covered with blood of innocent Sikhs on 1980’s while he was head of Amritsar Interrogation Center.