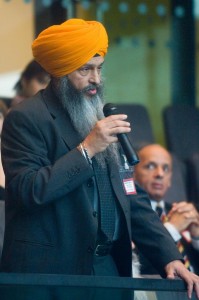 Bhai Amrik Singh, the Chair of the Sikh Federation (UK) said: ‘We appeal to the Sikh masses to remain vigilant of politicians on all sides that will go to any length and use the situation to their own personal advantage.’

‘Parkash Singh Badal knows Sikh voters in Punjab in very large numbers rejected him and Congress in the recent Lok Sabha elections. To his surprise many voted for a party (AAP) that had little or no party structure, finances or history in Punjab and incredibly took 4 of the 13 seats from Faridkot, Fatehgarh Sahib, Patiala and Sangrur, defeating some heavyweights on both sides in the process.’


‘Badal and his family are now fighting for their political futures. He is playing with fire and doing his utmost to use the formation of the HSGPC to play on Sikh sentiments and try and be seen in Punjab as representing Sikh interests. Sikh masses should be wary of the role of Congress as well as Badal’s crude political motives to retain power and control within his family at the expense of Sikh institutions.’

‘’It is obvious that Badal will use any tactic. He sees nothing wrong with overtly exerting political pressure for the unprecedented speedy excommunication of several Sikh leaders in Haryana. His actions are distasteful and he has once again undermined the institution of the Akaal Takht. This will prove to be a costly mistake.’

‘Due to the formation of the HSGPC he has threatened to resign as Chief Minister to put pressure on the Centre to intervene and forced the SGPC to send its staff and task force to Gurdwaras in Haryana. The pressure on the Centre has had limited impact, but the possibility of a violent clash in Haryana remains a real possibility. We appeal to all sides to show restraint and maintain calm.’

‘Badal has now convened a so-called Panthic meeting at the Sri Harmandir Sahib complex in Amritsar on 27 July. This is only for show and to rubber stamp his course of action. As far as we and many Sikhs in the Diaspora (UK and the rest of Europe, Canada, USA, Malaysia, Australia and New Zealand) that have been consulted are concerned the meeting on 27 July is a dangerous political gimmick and it has no Panthic legitimacy or credibility.’

‘Instead it is time to put in place a process to consult Sikhs worldwide and call a Sarbat Khalsa to fundamentally review and strengthen the supreme Sikh institution of the Akaal Takht that must at all costs be independent and sovereign. It should never be under the control and be accountable to any political party or the central Government of India. Legislation was first imposed in 1925 by the British to control Sikhs and the SGPC and similar bodies are inherently under the control of the central Government of India.’ 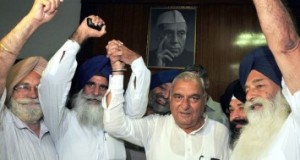