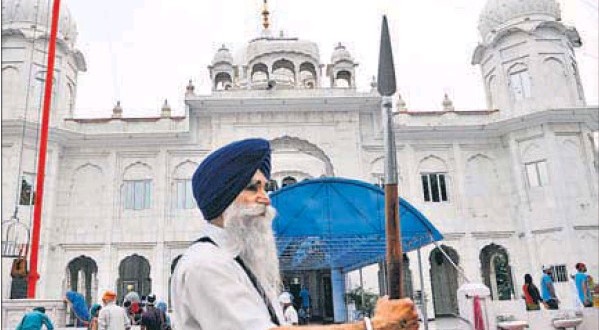 Panchkula, Haryana: Amid the stand-off over control of Sikh shrines in Haryana, tension gripped Nada Sahib gurdwara in Panchkula on Wednesday. About 200 jathedars from across Punjab, along with more than 25 Shiromani Gurdwara Parbhandak Committee (SGPC) members are camping inside the gurdwara.

Prominent among those present at the gurdwara were SGPC members Satwant Kaur Sandhu and Paramjit Singh Lakhewal and executive member Nirmal Singh Jaula.

The SGPC members descended on the gurdwara after supporters of the Haryana Sikh Gurdwara Management Committee (HSGMC) took control of a gurdwara in Kaithal and a violent foiled bid at Kurukshetra. However, members clarified that they were there just to pay obeisance. They claimed that they were least affected by what happened in Kurukshetra and the SGPC would continue to control all gurdwaras in Punjab as well as Haryana.

On Wednesday morning, a meeting was held which was chaired by Amritsar planning board chairman Vir Singh Lopoke. It was decided in the meeting that SGPC members will continue to camping at the gurdwara.

Speaking to HT, Ranbir Singh, senior vice-president of Youth Akali Dal, said, “We are here just to pay the obeisance and we can’t stop any of our Sikh brothers from visiting the gurdwara.”

Ujagar Singh Badali, former MLA and senior Akali leader, said, “For us Akal Takht is supreme and we shall abide by whatever the temporal seat tells us to. We have been directed to maintain peace and we are telling and guiding our people for the same. We are not here to fight.”

Those working at the gurdwara said senior leaders had told them that under no circumstances they should vacate the gurdwara.

CID sleuths could be seen making rounds of the gurdwara, along with Chandimandir SHO Arvind Kumar. The SHO has been meeting the SGPC members.

Those from Nada Sahib gurdwara on Wednesday wrote to DCP Panchkula, demanding protection. In the letter, they stated that they suspected HSGMC supporters to take control over the gurdwara, which may lead to tension.