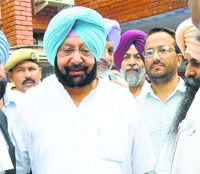 Stay away from politics: Capt to Takht Jathedar

Comments Off on Stay away from politics: Capt to Takht Jathedar 246 Views

“Akal Takht, the most sacred institute of the Sikhs, should not be involved in any dispute. The Akal Takht Jathedar should maintain a distance from politics,” said Capt Amarinder while referring to the controversy surrounding the HSGMC.

In the city to attend a court hearing in the Amritsar Improvement Trust land scam case, Capt Amarinder said there was nothing “unconstitutional” in forming a separate gurdwara committee, and that the “Badals were misleading the Sikhs for their vested interests”.

“They (Badals) are more concerned about earnings from gurdwaras through offerings and donations than the Sikhs’ interests,” said Captain.

Also, he said he would handle the forthcoming bypoll in Patiala while Punjab Congress chief Partap Bajwa would look after the affairs at Talwandi Sabo.

Amarinder held the Akhilesh Yadav government responsible for the communal clashes at Saharanpur in Uttar Pradesh. “Lawlessness anywhere shows the incapability of the state government concerned,” he said.