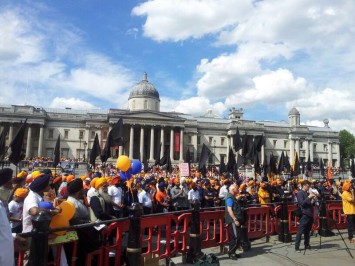 i. support for an independent public inquiry into British involvement in the June 1984 Sikh Genocide and pressure to silence Sikhs highlighting atrocities by the Indian authorities following the November 1984 Sikh Genocide

ii. UK Government recognition of the events of June and November 1984 as Sikh Genocide and backing from the permanent members of the UN Security Council for a UN-led inquiry into the actions of the Indian authorities

iii. larger as well as better Sikh representation by Sikhs and non-Sikhs in the House of Commons and House of Lords

iv. a separate ethnic tick box for Sikhs in the 2021 Census and public bodies and the media abandoning the throwaway term ‘Asian’

vi. introduction of a Statutory Code of Practice on the 5Ks and Sikh turban

viii. allocation of a suitable site in central London for a permanent monument to highlight Sikh sacrifices in the First World War that will be funded through public subscriptions

ix. UK Government working with other governments to exert pressure on France (and Belgium) to honour decisions by the UNHRC with respect to discrimination against turban wearing Sikhs

x. recognition and support for the Sikhs right to self-determination given the historic and moral responsibility of the UK Government towards Sikhs, the upshot may well be the need for Sikh independence and re- establishing a separate Sikh homeland.

The consultation meetings will allow for the sharing of information and suggested amendments to the Sikh Manifesto. The meetings will be held at: