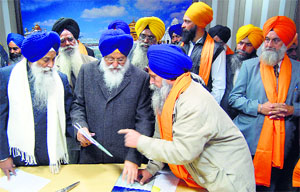 Amritsar, Punjab: The SGPC has expressed its inability to adopt an innovative technique to keep the computerised record of Guru Granth Sahib script.

To give a distinct identity to every manuscript of Guru Granth Sahib, an Australian team today demonstrated a software before Akal Takht Jathedar Giani Gurbachan Singh and SGPC president Avtar Singh Makkar.

After viewing the project, it was discovered that some technical difficulties may arise in giving individual identification to each holy script issued by the SGPC as these have identical designs.

The project is a technique of devising a computerised data base on the basis of a code generated as per the design of the holy script.

At present, no such record is being maintained by the SGPC. Around 25,000 NRI Sikhs had signed and submitted a petition last year with the SGPC in support of the project.

SGPC president Avtar Singh Makkar said though it was an appreciable move by the overseas Sikhs to secure the sanctity of Guru Granth Sahib, it needed some modifications.

Among those who designed this software are Prof Sukhbir Singh, Lakhwinder Singh, Gurbinder Singh, Inderjit Singh and Jaswinder Singh.

Muktsar: SGPC member Navtej Singh Kauni is in trouble again, this time for wearing shoes while performing ‘ardaas’ during the foundation stone ceremony of a new gurdwara at Doda village in Gidderbaha. Kauni had earlier committed religious misconduct twice and flouted the Akal Takht diktat by attending Dera Sacha Sauda “naam charcha”. Kauni admitted he was wearing shoes as the ceremony “was held early morning when it was very cold”.