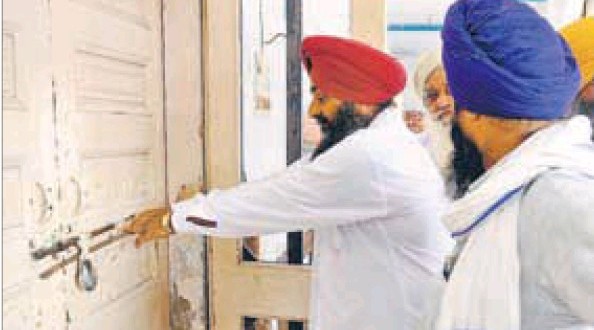 Chandigarh: The flare-up of tension in Haryana has jeopardised the fate of the ‘ice-breaking’ Jagadhri parleys between key leaders of the Shiromani Akali Dal (SAD), Shiromani Gurdwara Parbandhak Committee (SGPC) and Haryana Sikh Gurdwara Management Committee (HSGMC) held on Monday to resolve the crisis over the formation of a separate gurdwara panel in Haryana.

Already at daggers drawn, the warring factions — the SAD and the SGPC on one side and the HSGMC on the other — charged each other with betrayal, and gave ample indications that the “unanimous decision” taken in Jagadhri (Yamunanagar) to set up a panel of five Sikh intellectuals to hammer out a formula and defuse the stand-off was now in the doldrums. The SAD, which is finding itself completely out of potent ammunition to ambush the HSGMC and the political forces backing this newly-formed panel, described as a “very serious matter” Wednesday’s developments in Haryana where a historic gurdwara in Kaithal district was forcibly taken over by the HSGMC from the SGPC.

“They have betrayed us. The Haryana government is hand in glove with the HSGMC. As long as there is a Congress government in Haryana, no solution is in sight to resolve the issue,” SAD spokesperson Dr Daljit Singh Cheema said.

Cheema, who was one of the key negotiators in the Jagadhri talks, said SAD and SGPC leaders were not in touch now with HSGMC representatives. “The Haryana government wants to divide the Sikhs at any cost. What happened in Haryana on Wednesday is a clear violation of the Akal Takht directives,” Dr Cheema said.

On the other hand, Paramjit Singh Sarna, a known critic of the SAD as well as the SGPC, who had attended the Monday meeting on the advice of Akal Takht jathedar Giani Gurbachan Singh, blamed the SAD for escalating the impasse in Haryana and “betraying” the HSGMC by moving the Supreme Court, challenging the constitutional validity of separate committee to manage the affairs of gurdwaras in Haryana.

“They (SAD-SGPC) have again shown their double standards. They lack sincerity and have again proved beyond doubt their character of making forked statements,” Sarna told Hindustan Times on the phone. He said Sikhs of Haryana were provoked by the SAD-SGPC decision of going to the Supreme Court when the talks were going on. “They have engaged senior advocate Harish Salve.

This shows their intention… The SGPC member who has petitioned the apex court cannot pay Salve’s fee. This decision of the SAD-SGPC further shows the true intentions of the SAD, which the HSGMC will not tolerate,” Sarna cautioned.

As tempers flared in Haryana, SAD secretary general Sukhdev Singh Dhindsa spoke with Sarna. “I told Dhindsa to explain the rationale behind going to the Supreme Court. I told him that this negative approach of the SAD has complicated the issue.”

Meanwhile, for the third consecutive day on Wednesday, Punjab chief minister Parkash Singh Badal was camping in the Capital, in a desperate bid to seek help from frontline union ministers to defuse the crisis to the SAD’s advantage. But so far, Badal has been unable to turn the tide in his favour.