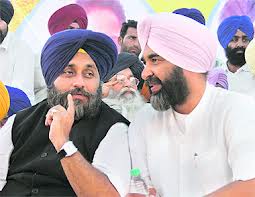 Comments Off on Manpreet Badal is an old ‘thug’: Sukhbir Badal 1,024 Views

Talking to mediapersons, Sukhbir said Manpreet was indulged in several “thuggian” (cheating activities) during his finance minister days. Sukbir used the contemptuous adjective for his cousin a day after a Chandigarh-based trader alleged that Manpreet got one of his commercial property vacated by implicating him in a false case.

“It is not the only case where Manpreet had indulged in shady things, there are other cases also including grabbing a petrol pump in Bathinda,” Sukhbir said.

Asked why he kept mum on the issue and did not speak earlier when Manpreet was committing excesses or defrauding people, Sukhbir said his relation with Manpreet was such that he never interfered with his working. “I have also come to know about these issues just now,” Sukhbir claimed.

Attacking former CM and Amritsar LS candidate Captain Amarinder Singh, Sukhbir said he had gone to Amritsar as a guest. “He holds his first rally at 1:30pm, second at 4:30pm, third at 6pm and then in his bedroom,” Sukhbir said, claiming that Amarinder was not cut out for tough electoral battle but was an easy going royal.

Sukbir claimed that SAD-BJP alliance would win all the 13 seats.

Though just 11 days are left for campaigning in Punjab, SAD has not yet released its manifesto. When asked about it, Sukhbir said the manifesto was almost complete but there were a few changes and had been sent to the press. He said it would be released in a day or two and would focus on national issues.