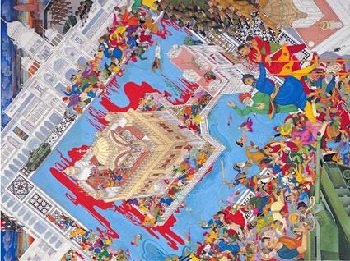 Nineteen Eighty-Four depicts the storming of the Golden Temple, the Sikh community’s holiest and most historic shrine, by Indian troops in 1984.

It reflects the personal sense of suffering and injustice felt by Sikhs worldwide, during the attack and in the aftermath of the violence which resulted in the injury and death of thousands of innocent men, women, and children in Punjab.

The different perspectives displayed by the composition seek to convey the “mixed feelings” experienced by the artist, along with many fellow Sikh-Britons – and Sikhs living in the diaspora – when news of the attack first appeared in the media.

The distant, bird’s eye view of the Golden Temple itself symbolizes the geographic and physical separation of the diasporan Sikh community from what was happening in India, and their consequent feeling of detachment which was heightened by “the notable lack of media coverage at the time”.

In contrast, the ground level close-up view of details in the foreground focuses on the atrocities carried out by the Indian army, emphasising the Diaspora’s emotional attachment and closeness to what was happening, despite being physically removed from the situation.

The painting was initially inspired by the artist’s anger at the “inadequate and biased media coverage which contradicted the personal, eyewitness accounts, that were filtering through from the Sikh community in India at the time and, later, the various Amnesty International and Human Rights Movement reports”.

In her “liberating” of the Golden Temple from alleged Sikh terrorists, who had based themselves in the grounds of the complex, the media generally portrayed Prime Minister Indira Gandhi as the moral victor.

However, the painting shows that “the main casualties of the attack were in fact the thousands of pilgrims who had come to pay homage on one of the most important religious days in the Sikh calendar”.

The bias of the media and “the damaging effects it has had on the image of the Sikhs” is symbolized by the group of blindfolded reporters who stand as “partners in crime”, shoulder to shoulder, with Indian troops (top left).

As something all too often orchestrated by the powers that be, this media bias provides another level of interpretation that extends the significance of the painting beyond the actual event depicted and points to broader issues of concern.

Namely, the manipulation of society and public opinion through State-controlled media and selective censorship. In this respect the painting’s title is intended as an allusion to George Orwell’s novel, 1984.

There is a sense of horror and panic as pilgrims scramble over one another to find refuge from the bullets and armoured tanks. The diagonals created within the composition by the steep line-up of soldiers (right) and the specific orientation of the square temple complex, lends to the visual disturbance and chaos of the scene. The surrounding borders of the painting hem in the fleeing crowds, enhancing the feeling of claustrophobia and revealing the futility of their attempts to escape.

The symbolic representation of the 17th century Sikh warrior and martyr, Baba Deep Singh, (seen here supporting his severed head in his hand) whose defence of the Golden Temple against Mughal invaders became legendary, “reflects the common belief among Sikhs that the attack of 1984 paralleled the worst atrocities perpetrated against them in past history”.

Indira Gandhi’s inclusion within the painting, even though she was not actually present during the attack, clearly puts the blame of bloodshed ultimately and squarely on her shoulders. Her political motives for the attack are called into question through those features which demonstrate the faultless past record of Sikh loyalty to India in India’s early battles against repeated foreign invasions and persecution, and throughout the fight for Indian Independence.

These include the Jallianwalla Bagh Monument which honours those Sikhs who lost their lives in the Amritsar Massacre of 1919 (a decisive turning point in India’s struggle for Independence), the severed head of Independence freedom-fighter Sardar Bhagat Singh Saheed and that of Guru Tegh Bahadar (the Ninth Sikh Teacher whose martyrdom for the sake of the Hindu faith earned him the title of “Hind Ki Chaddur” – or “Protector of India”).

Having been offered to India on a sacrificial plate, both heads are shown being frivolously tossed aside by Mrs Gandhi. These symbols provide a context to the “total incomprehension, deep sense of betrayal and hurt which Mrs Gandhi’s actions evoked within the Sikh community”.

Essentially, the attack of 1984 was regarded by many as an ill-judged move by Mrs Gandhi in her wrangle for popularity in the polls. In this respect, this painting takes on board a more universal message where Mrs Gandhi is depicted as a “multi-headed demon” composed of various 20th century politicians (including Clinton, Thatcher and Churchill) – who collectively “represent the kind of political abuse which manipulates the “dispensable” masses in an obsessive thirst for personal power”.