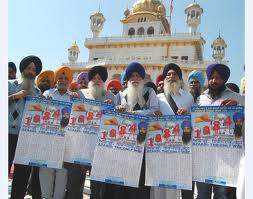 Amritsar, Punjab: Akal Takht Jathedar Giani Gurbachan Singh today said they were still getting suggestions on the Nanakshahi Calendar and the amended calendar would remain in force till a final decision on the matter.

Releasing the amended Nanakshahi Calendar for 2014 here today, he said suggestions by various Sikh organisations from across the world were being considered by the Sikh high priests.

The calendar issued by the Dharam Parchar Committee of the SGPC would be followed by the Sikhs till any further decision was taken on the issue. The SGPC officials said a Gurmat Samagam would be held at Gurdwara Manji Sahib Diwan Hall in the Golden Temple complex on March 13.

Meanwhile, the SGPC has announced that Gurgaddi Diwas of Guru Har Rai will be celebrated as Environment Day. Saplings will be planted in SGPC-run gurdwaras, educational institutions and hospitals on the occasion.