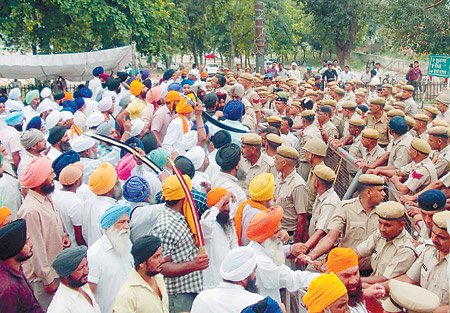 Kurukashetra, Haryana: The ad-hoc committee of the HSGPC has apparently taken over two other Gurdwaras in the State. Two Gurdwaras located in Ladwa, Kurukshetra, namely Gurdwara Sahib Patshahi Nauvi, village Deori and Bani Badarpur, are now under control of the HSGPC. Appointed Jathedar of Akal Takht Sahib, Giani Gurbachan Singh, has stated that the Hooda Government will be directly responsible for any violence in Haryana.

The situation is currently tense as the ad-hoc committee of HSGPC is desperately trying to take over control of the Gurdwaras from the SGPC Task Force. He also warned that HSGPC members may face stern actions as per Panthik traditions. The statement of Giani Gurbachan Singh has come after he had earlier refuted claims of working to appease the Shiromani Akali Dal (Badal). Giani Gurbachan Singh had said the decisions taken at Sri Akal Takht Sahib have no say of the Badal Government and all were taken after deliberation with other Jathedars.