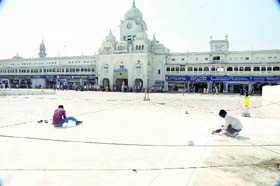 Amritsar, Punjab: The Golden Temple entrance plaza, which is all set for a Diwali opening, has evoked a mixed response from Sikh intellectuals. A few term it “not in sync with the heritage character” of the holy city while others dubbed it as the need of the hour in view of the growing number of pilgrims visiting the shrine.

Bibi Kiranjot Kaur, SGPC member, said: “The plaza is not in consonance with the heritage feel of the walled city. It is contrary to the architectural heritage of the shrine.” She felt though pilgrims should be facilitated, it would have been better had there been more of green area instead of marble flooring. She said the white marble was an eyesore as it would generate a lot of heat in summer, besides emitting sharp reflection.

She said the green belt would have provided the much-needed relief to the devotees. She also hit out at the facilities being planned at the plaza like a VIP lounge while stating that there was no place for VIP culture in Sikhism.

“It is against the concept of the Golden Temple which has four doors opening in all four directions, indicating that it is open to all without any discrimination,” she argued. The SGPC had stalled the move to get the World Heritage Status for the holy shrine a decade ago, contending that they would themselves maintain its heritage character, but now they seemed to have forgotten it, she added.

Bibi Kiranjot Kaur was then the SGPC executive member and had played a key role in preparing the dossier for the World Heritage Status from UNESCO.

Sikh scholar Ashok Singh Bagrian said the plaza was against the concept of Amritsar founded by Sri Guru Ram Das. He opined that the heritage character of the shrine and its surroundings should be maintained. “What they are doing in the name of development is tantamount to undoing what Sri Guru Ram Das had done,” he claimed.

Dr Balvinder Singh, conservation spatial planner, Guru Nanak Dev University, said: “From the layman’s perspective, the plaza is a welcome move as he gets a sprawling space to move around, but technically speaking it has disturbed a heritage zone. It has left a negative impact on the holy shrine’s grandeur as well as ambience.”

He said the plaza had ended the “feeling of surprise” which one used to have on reaching the sprawling premises of the shrine after crisscrossing the narrow bylanes of the walled city. “Now, one will see a far more spacious plaza before stepping into the Golden Temple complex,” he added.

There is also a section of intellectuals who see it a positive development. SP Singh, former Vice Chancellor of Guru Nanak Dev University, said the plaza would add to the beauty of the entrance area. “It was the need of the hour keeping in view the increasing number of pilgrims visiting the holy shrine. But, it remains to be seen how the SGPC maintains the plaza,” he said.

“The plaza has added to the beauty of the entrance area. It was the need of the hour keeping in view the increasing number of pilgrims visiting the shrine. But it remains to be seen how SGPC maintains the plaza”

“The plaza is not in consonance with the heritage character of the city. It is contrary to the architectural heritage of the shrine. There should have been more green area. The white marble is an eyesore. It will generate a lot of heat in summer”

“It (plaza) has disturbed a heritage zone, leaving a negative impact on the shrine’s grandeur. The plaza has ended the feeling of surprise that one used to have on reaching the sprawling premises of the shrine after crisscrossing narrow lanes of the city”

Previous: Retired teacher couple uses Gurbani to keep youth away from drugs
Next: Defamation: Court to hear Phoolka’s plea against Tytler on November 22