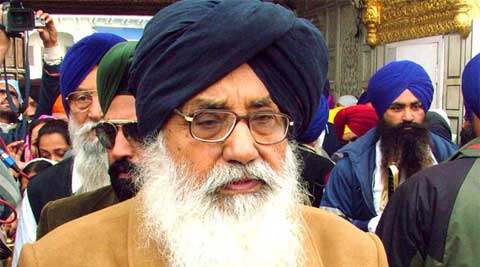 Chandigarh: The Election Commission of India (ECI) has called for the video footage of the March 16 Hola Mohalla speech and media address of Punjab chief minister Parkash Singh Badal, since it will not take its criticism lightly.

On March 15, the EC had banned political conferences during Hola Mohalla when the SAD had made elaborate arrangements already for the rally and its senior leaders had geared up to address the crowd of devotees. Even in a restrained speech, Badal couldn’t hold himself from criticising the EC and compared the situation to the 1975 Emergency, saying the ban had hurt his religious sentiments.

Silent on the issue, the state electoral office in Chandigarh has left the final decision to the ECI. “The commission is not taking its criticism lightly but exploring the legal provisions in this scenario,” said a source in the office of the Punjab chief electoral officer, adding that the commission would pass an order.

Deputy election commissioner Alok Shukla, in charge of polls in Punjab, confirmed over telephone that the ECI had not banned the political conference. “Our order meant that religion and politics couldn’t be mixed,” he said, adding: “The order quoted the law of the land as laid in the Constitution.”

Shukla said the commission would make a statement after studying the video footage. The panel comprising chief election commissioner and two commissioners is in Lucknow, and is expected to pass on order on the issue after returning to Delhi. Sources say there is no written law that the EC can’t be criticised. Also, in the Punjab political set-up, religion is an important part.

In Punjab, the Shiromani Gurdwara Parbandhak Committee (SGPC), a religious body, plays an active role in elections and supports the Shiromani Akali Dal (SAD), as its elected members belongs to that party. Chief election commissioner VS Sampath is expected to visit Punjab next week to review the Lok Sabha contest arrangements.

He is expected to issue transfer orders of certain high officials and give his decision of the Hola Mohalla speech. The CEC will meet representatives of political parties and state officials. By the same order, the political conferences planned for April 13, during the Baisakhi celebrations at Talwandi Sabo and Bathinda, also stand cancelled.

The SAD, which uses Hola Mohalla and Baisakhi as occasions to up the ante against their opponents, is sulking; and has decided to take the issue to the highest level. Punjab’s eligible voters have a final chance on April 2 to sign up for participating in the April 30 process.