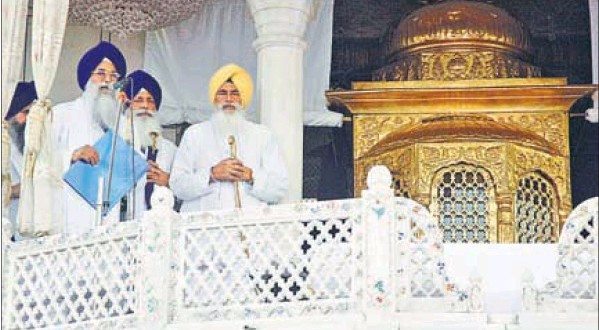 Comments Off on Akal Takht to decide on pardon after studying SGPC panel report: jathedar 762 Views

Amritsar, Punjab: The five-mem-ber Shiromani Gurdwara Parbandhak Committee (SGPC) probe panel may have recommended pardoning those involved in the clash that took place inside the Golden Temple during the Operation Bluestar anniversary function on June 6, but the final decision will rest with the Akal Takht.

An indication to this was given by Akal Takht jathedar, Giani Gurbachan Singh, here on Friday when he said that a decision will be taken after going through the report of the panel, which is currently lying with SGPC chief Avtar Singh Makkar.

“We have not yet received the report. When we get it, the ‘Singh Sahibs’ (high priests) will examine it and then take a decision on whether to pardon (the guilty)”, the jathedar said while replying to a media query after chairing a meeting of the high priests at the Akal Takht secretariat here.

The jathedar was specifically asked whether he would direct the SGPC to get the criminal cases filed against those involved in the clash withdrawn. He remained evasive when pointed out that the 22 persons who are behind the bars for their involvement in the June 6 violence, have agreed to undergo religious punishment that is awarded by the Takht for having breached the ‘maryada’ (tradition). “We will look into that aspect after getting the report”, he quipped.

Meanwhile, in an important decision taken by the clergy, Baldev Singh, a resident of Buddha Jaura village in Ganganagar district of Rajasthan, was excommunicated from the Sikh ‘panth’ (community) for failing to appear before the Akal Takht, despite being summoned a number of times. He was also accused of “defying the Akal Takht and challenging its supreme authority”.

The announcement to this effect was made after the meeting of the clergy by Giani Gurbachan Singh from the balcony of the Akal Takht over the public address system
As per the decision, the Akal Takht has directed that Baldev Singh should be socially boycotted by members of the ‘panth’. The boycott will stay so long as Baldev Singh does not ‘submit’ before the highest temporal seat of Sikhism and seek pardon.

The case against Baldev Singh goes back to 2010, when certain Sikhs of Rajasthan handed over a written complaint to the jathedar, accusing him (Baldev) of violating the ‘maryada’ of the gurdwara at Buddha Jaura village, which he manages. Several other members of the managing committee of this shrine were also accused of similar charges.

In February, the jathedar had declared Baldev Singh and eight other members of the committee ‘tankhaiya’ (guilty of religious misconduct). While Baldev Singh and two others, Narinder Singh and Paramjit Singh, refused to appear before the Akal Takht, the other six were pardoned after they appeared before the Sikh clergy early this month.

“We have given Narinder Singh and Paramjit Singh, another chance as they have expressed the desire to submit before the Takht while Baldev Singh did not. The two could not come for various reasons and now they have been told to appear before the clergy at the date to be intimated,” the jathedar added.

Replying to questions regarding Makkar’s decision to dissolve the 15-member managing committee of Takht Patna Sahib, the Jathedar said, “Both sides are at fault”.

The two sides that the Jathedar refused to name are the two factions of the Patna Sahib managing committee. While one of the factions has sacked Giani Iqbal Singh as jathedar of the Takht, the other faction has come out in his support.

Members of both the factions clashed with each other during a religious function at gurdwara Patna Sahib in January. The clash took place after Giani Iqbal Singh, supported by one faction, refused to acknowledge an appointment made by the rival group.

According to reports, Makkar had last week held a meeting in Patna in which he claimed the support of eight members of the committee. The meeting took a decision to dissolve the managing committee. Makkar, in his capacity as SGPC chief, is a member of the Patna Sahib managing committee. The other faction has termed this meeting as “illegal” and has refused to accept its decision.