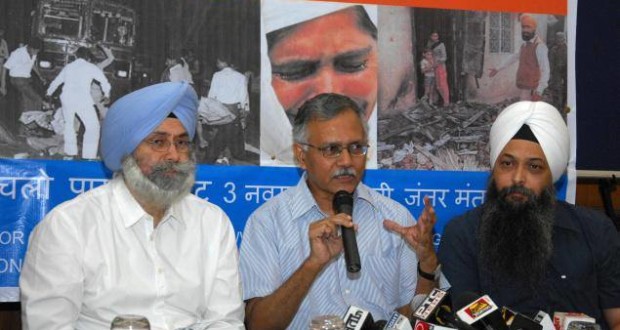 Advocate Phoolka, known for his tireless efforts to bring justice to the 1984 anti-Sikh Genocide, was named in the party’s first list of 20 candidates announced on Sunday. He will be pitted against Congress MP Manish Tewari.

As the announcement came when he was leading the Jhadu Chalao Rally, an awareness campaign by the party, in the city, his supporters cheered him with slogans.

Commenting on his opponent, Advocate Phoolka said the former rarely visited his constituency and did not care about issues of the city residents. “Manish Tewari started visiting Ludhiana only a few months ago, clearly with an eye on the Lok Sabha elections. He never cared to visit the city before. I am sure, people of Ludhiana no longer want Tewari as their representative in the Parliament,” Phoolka told a crowd of supporters.

Delhi candidate Jarnail Singh rose to international attention when in April 2009 whilst serving as a journalist with a national daily, he hurled a shoe at Mr Chidambaram, who was then the Home Minister, in protest against his remarks on the clean chit to Congress leaders in the 1984 anti-Sikh Genocide.

“He (Chidambaram) had said he was happy that his friends (Sajjan Kumar and Jagdish Tytler) were exonerated. I was unhappy over this because he was the Union Home Minister then, and such words did not suit him.

“So, in a press conference at the AICC office, I asked him about his comments to which he responded that I was using the forum (press conference) for my agenda,” Jarnail Singh said.

Upset over this, he hurled a shoe at the minister. “It did not hurt him. It was just a symbolic protest,” he said.

After the incident, Jarnail Singh received several requests from parties to contest, but he declined the offers as he did not want to enter politics then. He was, however, impressed with AAP’s slogan of clean politics.

“Arvind Kejriwal joined us in our protest (seeking justice for anti-Sikh Genocide victims) and assured us that his party would form an SIT (Special Investigation Team) to probe the anti-Sikh progrom cases if it comes to power,” he said.

“I have been associated with the party since May 2013. I have told him (Kejriwal) that I will do any service to the party… even if it is the job of a watchman,” he said.

On campaigning plans, he said his focus would be on Sikh-dominated constituencies in West Delhi.

“There are some three to four Sikh-dominated segments in West Delhi,” Singh said, adding that there will be party meetings tomorrow after which the campaigning will start.

The West Delhi constituency has a sizable chunk of Poorvanchali population and is currently represented by Congress leader Mahabal Mishra.