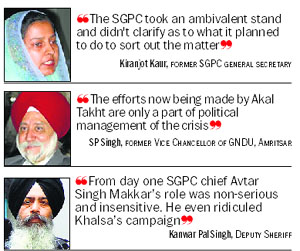 Amritsar, Punjab: With Gurbaksh Singh Khalsa refusing to obey the Sikh clergy’s directions to end his fast and continue with his stir for the release of Sikh detainees, there is a feeling among Sikh intellectuals that Akal Takht and the Shiromani Gurdwara Parbandhak Committee (SGPC) could have handled the issue in a better way.

Former Guru Nanak Dev University Vice Chancellor SP Singh said Akal Takht and the SGPC at first thought that Gurbaksh Singh’s fast was a “non-issue”. The Akal Takht Jathedar even declared that resorting to a fast was against Sikh tenets.

He said efforts now being made by Akal Takht were “too little” and a part of “political management” of the crisis.

He said none of the ruling SAD leaders had issued a statement either in support or against Khalsa’s movement.

“Even Chief Minister Parkash Singh Badal ignored the issue till a couple of days ago,” he pointed out, adding that it was time that the SGPC and Akal Takht arose above politics to deal with Panthic issues.

Former SGPC general secretary Kiranjot Kaur said Akal Takht had directed the SGPC to initiate measures for the release of Sikh detainees, but the SGPC had not made it clear as to what its stand on the issue was.

She said the matter should have been resolved at the political level and the SGPC should have taken a lead in it. “ The SGPC took an ambivalent stand and didn’t even clarify as to what it planned to do to sort out the matter,” she said.

Sikh scholar Ashok Singh Bagarian said the Sikh clergy should suo motu take notice of Panthic issues. He said it was unfortunate that Gurbaksh Singh had to resort to an agitation to seek the release of Sikh detainees who had completed their jail term.

He said Akal Takht and the SGPC could have handled the situation better.

“It would have been more apt had the Sikh high priests tried to resolve the crisis through the political leadership.”

Dal Khalsa spokesperson Kanwar Pal Singh said the SGPC and the Akal Takht Jathedar had not played their role in a positive manner. “From day one SGPC chief Avtar Singh Makkar’s role was non-serious and insensitive. He ridiculed Khalsa’s campaign to prove he was more loyal than the king (read Badals). The Jathedar’s stand remained confused and self-contradictory,” he said.