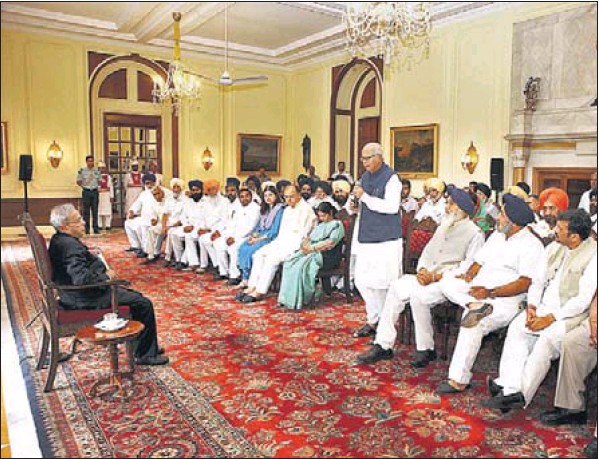 Comments Off on Sikhs unite against Sajjan 481 Views

New Delhi: The Sikh rally held at Jantar Mantar on Wednesday was possibly the largest gathering of Sikhs in the Capital.

They had gathered to protest the acquittal of Congress leader Sajjan Kumar in a 1984 Sikh genocide case by a Delhi court on April 30.

Nirpreet, who has been on a fast since May 3, ended her fast on Wednesday.

By noon, the road leading to Jantar Mantar was packed to the hilt. Nearly 3,000-4,000 protesters waited for Punjab Chief Minister Parkash Singh Badal to arrive. Sikh men, who outnumbered the women by a huge margin, raised slogans and the air reverberated with “Jo Bole So Nihal … Sat Shree Akal.”

Bibi Jagir Kaur, a Sikh leader, congratulated Jagdish Kaur and Nirpreet Kaur — both crucial witnesses against Sajjan Kumar — for taking the lead in the fight for justice. Nirpreet remained in the tent a few feet away.

“Possibly, ours is one country which has harassed the community that has contributed so much for this country, for the society. Congress had used the entire government machinery for opening a front against us then,” Badal said and appealed to Sikhs to maintain unity. Gurbachan Singh appealed to Nirpreet to end her fast. “We will send out messages through Sikh sangats to join hands.”

“We want that a special investigation team (SIT) be formed and it should probe the cases under the supervision of the Supreme Court. There are so many cases on which no action has been taken like the Nangloi case which has been pending for 25 years,” he told reporters after meeting the Prime Minister.

Badal, who was accompanied by his son and deputy chief minister Sukhbir Badal, said his party had demanded that the government should not appoint its counsels for arguing the cases related to Sikh genocide.

“They have said that the central bureau of investigation would appeal in the high court against the (recent verdict on Sajjan Kumar’s acquittal) on the issue.

We demand that government counsels should not be appointed for it and they should be outsiders so that justice can be done,” he said. Badal said they have also demanded that action should be taken in the cases against Congress leader Jagdish Tytler also.

Top leaders of BJP and Shiromani Akali Dal, alongwith those of Shiv Sena, Samajwadi Party and JD-U handed over a memorandum to President Pranab Mukherjee, asking him to direct the Centre for acceptance of their demands in addressing the grievances of the Sikh community.

“We requested President Pranab Mukherjee that the whole nation is looking at him, because we feel the present government will not give justice,” Punjab’s deputy chief minister Sukhbir Badal said after meeting the President.

A Delhicourt will on Thursday hear arguments on the quantum of punishment in the 1984 Sikh genocide case in which Congress leader Sajjan Kumar was acquitted, while five persons were convicted for being part of the mob that had killed five Sikhs.

District Judge JR Aryan had earlier deferred the matter to May 9 after central bureau of investigation prosecutor, senior advocate RS Cheema, had expressed his inability to appear before it on May 6.