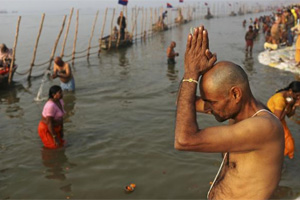 Amritsar, Punjab: The All India Sikh Student Federation (AISSF) today objected to the apex religious body of the community, Shiromani Gurdwara Parbandhak Committee (SGPC)’s decision to participate in the ‘Maha Kumbh Mela’, saying that it is against the “basic tenets” of the religion.

“The community respects all the religions but forgetting one’s own glorious past and following the tenets of other religion is not acceptable,” AISSF president Karnail Singh Peer Mohammad said in a statement here.

His statement comes in the wake of SGPC accepting an invitation extended by Rashtriya Swayamsewak Sangh(RSS) president Mohan Bhagwat to attend the two-months long Maha Kumbh Mela beginning from tomorrow.

He said the Mela had no significance in Sikhism and participation in the religious gathering would send out a wrong signal, especially about the independent identity of the Sikhs.