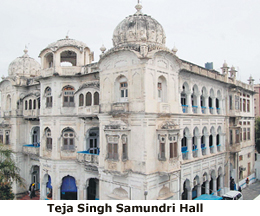 Amritsar, Punjab: Even though it has been almost two years since the SGPC elections were held, the fate of the new SGPC House continues to hang in the balance. The matter is stuck in a legal tangle over the Sehajdhari row. The SGPC House has a tenure of five years.

The hearing in the case pending before the Supreme Court was to take place today. It has been now listed for October 4.

Avtar Singh Makkar, SGPC chief, said: “We hope that the Supreme Court will deliver its verdict early and that it will be in our favour as the Centre has come out in our support.”

Former SGPC general secretary Bibi Kiranjot Kaur said it was unfortunate that an institution that had fought for the rights of the Sikhs had to make the rounds of courts for its very existence. First-time SGPC member Manjeet Singh said the court should expedite the proceedings in the case.

There came a glimmer of hope in April this year when Sehajdhari Sikh Party president PS Ranu said they were mulling to make a submission in the Supreme Court that the new SGPC House be allowed to function, if the Sehajdhari Sikhs were given the voting rights in the next SGPC elections.

He issued the statement after two rounds of talks with Deputy Chief Minister Sukhbir Badal.

However, the move was not well received in Panthic circles with the SGPC chief arguing that there was no concept of Sehajdhari in Sikhism and, hence, the Sehajdharis could not be given the voting rights.

The SGPC elections were held on September 18, 2011 and 15 members co-opted on December 5, 2011. Subsequently, the Centre issued a notification constituting the new SGPC House on December 17, 2011.

However, the Punjab and Haryana High Court’s December 20, 2011, verdict, quashing the 2003 notification barring the Sehajdharis from voting in the SGPC elections, plunged the new House into a crisis.

The SGPC later challenged the verdict in the Supreme Court. Hearing the SGPC petition on March 30, 2012, the apex court allowed the old SGPC executive (elected in November 2010) to manage gurdwaras and institutions under the SGPC till further orders.

The Supreme Court stated that the House elected in September 2011 without the Sehajdhari Sikhs’ participation could not be allowed to hold its first meeting and elect office-bearers in the light of the Punjab and Haryana High Court verdict restoring the voting rights of the Sehajdharis.