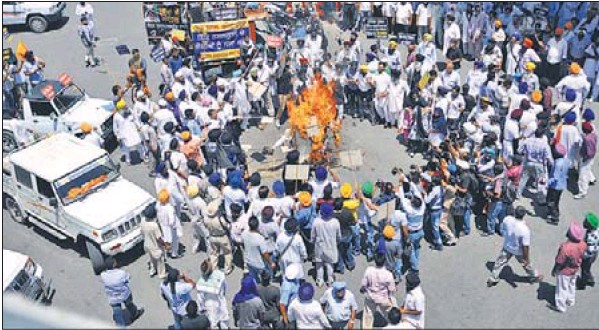 Jalandhar, Punjab: In protest against the recent acquittal of Congress leader Sajjan Kumar, a key accused in 1984 sikh genocide, by a Delhi court, leaders of ruling Shiromani Akali Dal (SAD) and several other sikh organisations took out a protest march in the city and burnt the effigy of Kumar and the United Progressive Alliance government.

Protesters wore black gowns and carrying placards, gathered at local Model Town gurdwara at around 10 AM and took out a peaceful procession up to Gurudwara Guru Nanak Mission.

However, BJP leaders stayed away from the protest.

Pargat said that it was shameful that even after 29 years of massacre of more than 10,000 sikhs, justice was elusive.

Previous: Lecture on Sikhs’ migration held at PU
Next: 1984 genocide: Three get life term, two others 3 yrs in jail