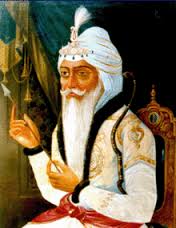 London, UK: A rare account of Maharaja Ranjit Singh’s court, written in French by the French botanist and geologist Victor Jacquemont, is being offered for sale on Wednesday in the UK by Mullocks auctioneers.

The two-volume leather-bound account by Jacquemont includes the Frenchman’s meeting with Ranjit Singh at Lahore in 1931. In his account of the royal Sikh Durbar, Jacquemont writes about the Akalis, saying, ‘…the Akalis or immortals are properly speaking Sikh faqirs. The sacred pool at Amritsar is their headquarters but they often spread themselves over the Punjab in large and formidable parties. Ranjit Singh wisely turns their ferocity to his own advantage.

“He enlists them in his armies and employs them preferably against Mussalman enemies. He has at the moment 4,000-5,000 of them in the army which he maintains at Attock ready to march against another fanatic Syed. I have only seen two of them in the streets of Amritsar, it was evening and the matches of their muskets hung ready lighted. I had never seen more sinister looking figures.”

In his description of Ranjit Singh, he comments: “His right eye is very large, his nose is fine and slightly turned up, his mouth firm and his teeth excellent. He wears a slight moustache which he twists incessantly with his fingers and a long thin beard which falls to his chest. His expression shows nobility of thought, shrewdness and penetration and these indications are correct.”

Other items for sale include an 1839 map of the Punjab by Chapman and Hall, which shows the Punjab kingdom in the year Ranjit Singh died.

An 1844 lithograph by Emily Eden of Ranjit Singh’s grandson, Purtaub Singh, son of Maharaja Sher Singh, is additionally part of the auction. After Ranjit Singh died in 1839 and the Sikh nation descended into confusion and anarchy in the battles to establish his successor, his son Sher Singh finally ascended the throne in 1841, but was killed by some Sikh chieftains in a massacre at Lahore in September 1843. His young son Purtaub Singh was also killed.

A file box of documents from the personal archives of Prince Frederick, Ranjit Singh’s grandson and second son of Maharajah Dalip Singh, is also part of the sale. It contains some 60 signed letters addressed to the Prince, also numerous documents, notes in the Prince’s hand, genealogy and pedigrees compiled and researched by the Prince, altogether some 200 items in original storage box, which came from his personal archives at Blo’ Norton Hall, Norfolk, with a handwritten catalogue titled ‘Manuscripts in the collection of Prince Frederick Duleep’.