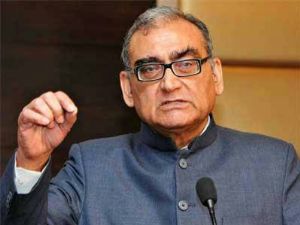 Katju’s letter comes close on the heels of a two-judge bench of the Supreme Court rejecting the plea of Bhullar, a Khalistani terrorist and death row convict Bhullar in a judgement that paves the way for his execution.

Katju said that Bhullar has been in detention since his arrival in India in January 1995 i.e over 18 years and added that he had suffered prolonged mental agony and trauma for this long period in death row with a Damocles’ sword hanging over his head.

Assigning reasons behind his plea, Katju said Supreme Court had earlier rejected Bhullar’s appeal against his death sentence by a 2-1 majority, not by a unanimous decision and added that the senior most judge on the bench Justice M B Shah had acquitted Bhullar.

Katju said that he had perused the judgement of Justice Shah who had noticed that the only evidence against Bhullar is his alleged confessional statement to the investigating office.

He added that Justice Shah noticed in his judgement that there was nothing on record to corroborate the aforesaid alleged confessional statement.

Katju said that the majority view of the bench has to be accepted as the judgement of the court but added that the considerations under Article 72/161 of the Constitution were different from those in judicial proceeding.