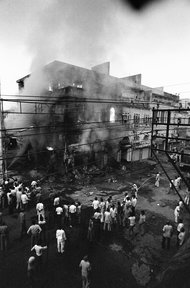 Delhi: Laying blame for the 1984 massacre of thousands of Sikhs in India has taken center stage in Delhi again after a court reopened an investigation against the Indian National Congress Party politician Jagdish Tytler.

Three more witnesses, now living in the United States, are expected to be questioned by the Central Bureau of Investigation, after a Delhi district court on Wednesday rejected a 2009 “closure report” by the agency.

Mass killings of Sikhs occurred in the days after Prime Minister Indira Gandhi was assassinated by her two Sikh bodyguards on Oct. 31, 1984. While the official death toll of the anti-Sikh Genocide is 3,000, Indian media estimate that as many as 7,000 Sikhs were killed all over the country.

Witnesses to the riots have alleged that leaders of the Congress Party instigated revenge attacks against the Sikhs.

Mr. Tytler, 69, has previously said that he was with Mrs. Gandhi’s body at her residence when killings at a nearby Sikh temple occurred, and he reiterated this position on Thursday. The Congress leader told CNN IBN news channel that he had helped Sikhs during the riots.

“I’m the only person who arranged camps for the Sikhs and stayed with them. In my constituency I got people to stay in my house during the incident and also stopped a mob,” he said.

Lakhwinder Kaur, whose husband was killed in the Hindu riots against Sikhs, had previously appealed to a Delhi court to reject the government investigation which had cleared Mr. Tytler of being involved in the violence.

Ms. Kaur has accused Mr. Tytler of inciting a mob at the Gurudwara Pulbangash, a Sikh temple in Delhi, on Nov. 1, 1984, where three Sikhs, including her husband, Badal Singh, were killed.

On Wednesday, Additional Sessions Judge Anuradha Shukla Bhardwaj set aside the 2009 “closure report” by the Central Bureau of Investigation, and asked the agency to question three witnesses, and more if necessary. The Central Bureau of Investigation contended in its closure report, which had been accepted by a lower court in 2010, that the three witnesses were not credible.

Judge Bhardwaj rejected the closure report in part because the investigating agency didn’t record any statement from the witnesses it thought were not credible, H.S. Phoolka, Ms. Kaur’s lawyer, said Thursday.

“The court asked why did the C.B.I. not record their statements,” he said. “How can it tell if they were credible or not if it doesn’t have the statements?”

“No police case has ever been registered against Mr. Tytler due to his political power,” Mr. Phoolka added. Mr. Phoolka said that the Sikh temple which was attacked was close to Mrs. Gandhi’s Teen Murti Bhawan house in south Delhi for Mr. Tytler to visit it and return to her home.

Mr. Tytler has submitted filmed footage of his presence at the house that day to the courts, but it does not have any times on it, he said. “He could have gone and come back within 30 to 40 minutes,” he said. Mr. Phoolka also said that Mrs. Gandhi’s personal aide R.K. Dhawan and Bollywood actor Amitabh Bachchan also appear in the footage along with Mr. Tytler. “They should also be asked what time he was present,” he said.

In 2005, Prime Minister Manmohan Singh, who is Sikh, apologized for the Sikh massacre.

“I have no hesitation in apologizing not only to the Sikh community but to the nation because the riot negated the concept of nationhood,” he said. “I bow my head in shame for what happened. But there are ebbs and tides in a nation’s history.”

Mr. Phoolka said that in the past three years about 25 people have been sent to jail in connection with the 1984 killings. “And these have been small fries,” he said. “No political leader has gone to jail.”