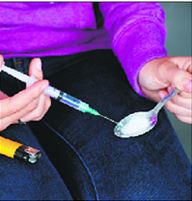 Health officials worried over use of heroin injections

“If 50 per cent of the patients that come for treatment are heroin users, 10 per cent of them use to inject the drug directly into their veins,” said Dr P D Garg, head of the Department of Psychiatry, Government Medical College, Amritsar.

The heroin is usually sniffed or smoked but the trend of the taking the drug through injections has seen a rise in the recent years.

“This is really baffling and has become a serious problem,” Dr Garg said. He said addicts take the drug through injections for instant kick or were unaware of the fact that it might prove to be fatal for them. He said the expensive drug slow down the functioning of the heart and decreases the respiratory rate, which could result in sudden death.

Dr Garg said the sharing of needles also carried the risk of deadly infections such as hepatitis B, hepatitis C, HIV (AIDS). Besides, they could also suffer from various skin diseases, blocked veins, blood infection and arthritis, the doctor added.

“Though the state government has taken several steps to check the drug peddling and rehabilitation of drug addicts, more steps are required to curb the menace,” he said.

Quoting a report of the United Nations, Dr Garg said there were about one million registered heroin users in the country while in reality the number was many times higher. Dr Garg said the situation was grim and the government should initiate urgent steps to eradicate the menace.