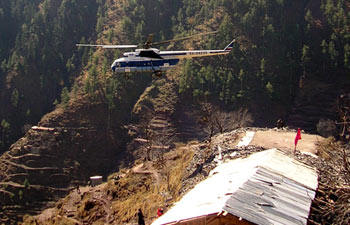 Chandigarh, Punjab:  The Punjab Government today hired a helicopter to airlift the pilgrims stuck at Hemkunt Sahib and its surrounding areas.

Disclosing this here today, an official spokesman said the helicopter had been hired following the directions of Chief Minister Parkash Singh Badal. He said the Chief Minister had constituted a team comprising Special Secretary KS Pannu and DIG Khubi Ram among others, which had already left for Dehradun to monitor the ongoing rescue operations.

The spokesman said the team had been asked to ensure the safe return of Sikh pilgrims who had been trapped at Hemkunt Sahib due to inclement weather followed by flash floods causing road blockades at several places. The team would also visit Joshimath and Hemkunt Sahib to observe and coordinate the rescue operations.

It said Chief Secretary Rakesh Singh was also keeping a constant liaison with the Uttarakhand administration to provide help and support for the rescue operation.

She added the minster informed her that about 500 pilgrims had been evacuated from Govind Dham gurdwara.