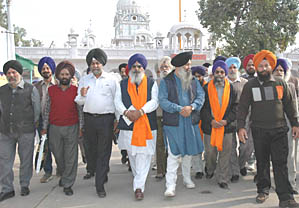 The march is being carried out to secure the release of the Sikh youths, who have been languishing in various jails across the country despite having served their sentences.

Various speakers at the gathering observed the unity among the various religious organisations and the Sant Samaj as a positive development in this matter.

A Haryana leader Gurbaksh Singh Khalsa of Kurukshetra, whose indefinite fast in support of demand for freeing the youth entered its 21st day, here today, said protest marches would be organised in various cities of Punjab to urge the government to accept their demands.