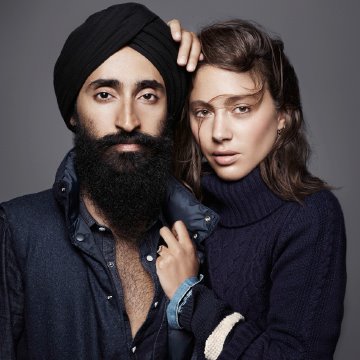 Chandigarh, Punjab: An advertisement featuring a turbaned Sikh with a flowing beard may do for the community what nothing else has in such measure to promote their cause. It has the face of Indian-American designer and actor Waris Ahluwalia, which most Sikhs like to believe would educate the general public on who they are and help curb hate crimes against them.

One of the biggest apparel retail chains in the world, Gap, features Ahluwalia in its ‘Holiday 2013′ ad campaign, along with actor and filmmaker Quentin Jones, for the first time. Although there are a few who consider Ahluwalia doing the ad in bad taste, or even consider it as offensive, most in the community feel it is a great thing for them, especially since ignorance breeds hate and they become targets of mistaken identity in US.

A debate is raging on social media and web, with Sikhs discussing the pros and cons of the ad. Incidentally, no Indian apparel company has ever featured a turbaned Sikh with a full beard in its ads till now.

Sikh columnist Kanwar Singh has batted for the advertisement on a popular website. “When I first saw Gap’s ad campaign, I was concerned that it may have positioned a turban-wearing Sikh simply to monetize on his appearance. However, I soon realized that Gap had done us an extraordinary favour by placing Waris Ahluwalia in prominent locations across the country. Gap has raised the profile of our community in ways we could not have accomplished with our limited resources. To me, it’s a matter of pride that a turban is being positioned as a fashion statement,” he argued in his column.

However, Gursant Singh, a Sikh of American origin, has announced to hold a protest in front of Davis California Gap Store on December 5. He wants the company to remove the Waris ad. He finds it “disrespectful” and “insulting” to the community, as it features a Sikh with a woman who has placed her hand on his turban and the other on his chest.

“By handing out leaflets about the Sikh religion and talking to people at the Gap store, we can better inform the public about Sikhs being religious and family-oriented people,” he posted on his Facebook page.

Advising against any protests, Kunwar stated, “I strongly believe that a demonstration against this ad campaign might stop corporations, who may be willing to use their invaluable resources towards advancing our collective struggle for more visibility and awareness, in the future.

A Sikh resident of California, Sandeep Singh Chahal, concurred with Kunwar’s views. “Our community has been facing hate crimes due to mistaken identity and this campaign will help raise awareness about our identity,” he told TOI over phone from California.

“Not everyone will appreciate Waris’s approach, but there is one thing we can all take from this advertisement – all of us need to play our part in raising awareness about who Sikhs are. Real awareness will come when those who stand with Waris also consider wearing a turban in public. Even for one day to begin with, but slowly, let’s find our roots and realize that as Sikhs we need to stand out and not blend in,” wrote IT professional Prabhdev Singh, a practising Sikh, in his article titled “What can we take from Waris’ GAP Ad?”

He further wrote that he found the ad by Gap much more decent when compared to the ones published in routine by Punjabi newspapers.