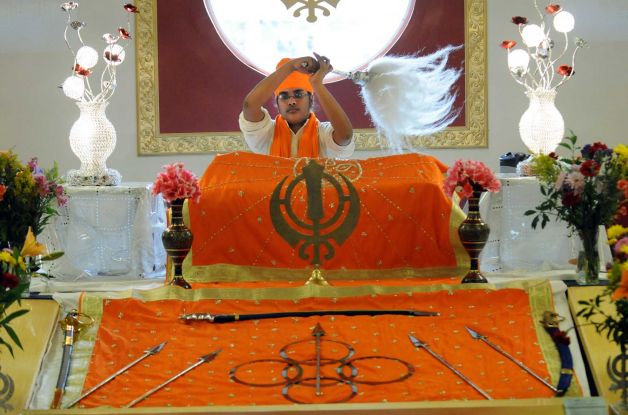 A new home for a growing congregation

New York, USA: The melodic duet of the tabla and harmonium welcomed visitors to the Capital Region’s new Gurudwara on Saturday as the Sikh temple held inaugural services for its growing congregation.

Smells of heavily spiced cooking wafted upstairs from the new temple’s community kitchen, a backdrop to an echo of traditional hymns and bustle of congregants filtering in and out. Festivities began early Thursday as members of the congregation took turns reading through the Sikh holy text, Guru Granth Sahib, continuously over 48 hours.

As the Capital Region Sikhs celebrated their expanding religious community, though, just over the Rensselaer County border demolition crews began work to rip St. Patrick’s Church from the Watervliet skyline. The 19th-century church was shuttered in 2011 due to declining church attendance. Since then, the Roman Catholic Diocese of Albany has merged more than 30 parishes.
The region’s Sikh population, though, continues to grow.

When Maninder Gujral first joined the congregation in 1993, it boasted only about 50 members. They met at the Sikh Association of Capital District’s temple in East Greenbush, established in 1984.

Since then membership has ballooned to more than 200 congregants — far too large for the congregation’s former, modestly sized house of worship.

“Our membership has grown so much,” said Gujral, a spokesperson for the temple. He said the temple hunted for a new home for its emergent congregation for the past five years.
The two events — the inauguration of a Sikh temple and the demise of a historic Catholic church — provided stark evidence of the changing religious makeup of urban areas in the Capital Region and elsewhere.

A recent Gallup poll found the region is among nation’s least religious, ranking ninth among the least religious of the 189 areas polled. A study released in October by the Pew Forum on Religion & Public Life found that one-fifth of American adults classify themselves as having no religion in particular. The study found the biggest drop-off in Catholic and Protestant populations, while memberships in faiths designated as “other” (not Christian) actually increased from 4 to 6 percent. At the time, both the Roman Catholic Diocese of Albany and the Capital Area Council of Churches noted declines in their membership in line with the Pew study.

The new Sikh temple on Washington Avenue, once a banquet hall, was purchased last year. Between the purchase price and renovations, the temple cost the Sikh Association of Capital District about $700,000. The temple hopes that a $250,000 loan taken out to afford the new space will largely be paid for by congregation donations.

On Saturday afternoon, a small parking lot and the temple’s surrounding streets were jammed as worshippers flocked to the new sacred space.

Dozens of Sikhs, as well as a few curious outsiders, sat cross-legged on deep-blue-and-red carpeting in the temple’s main hall of worship. Some hummed along to hymns projected on a wall. A volunteer from the congregation waved a chauri, a ceremonial whisk, over the sacred text.

Below the worship hall, many more dined on the traditional community meal, which congregation families take turns preparing each Sunday.

The task of preparing food for well over a hundred hungry worshippers, though, is not as great a challenge as one might assume, Gujral said. The congregation has so many members that in a year each family will only have to staff the kitchen once or twice.