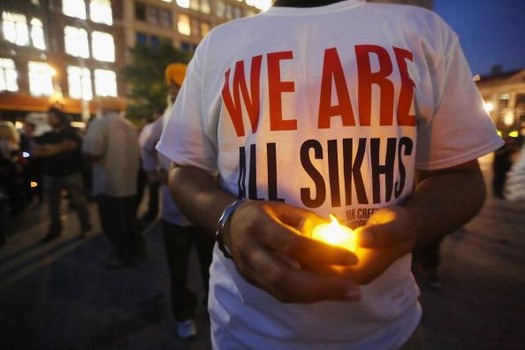 Comments Off on Sikh shooting officer: Cop lives to tell his tale 465 Views

Wisconsin,USA:A Sikh shooting left an officer wounded but not dead in Wisconsin back in August and now he’s talking about the day that he survived. On Nov. 20, The Inquisitr reported that officer Brian Murphy was shot 15 times when he arrived at a Sikh Temple months ago. In a new interview, Murphy says that he was just doing the right thing—and that he doesn’t want to be regarded as a “hero.”

“I just do what you’re supposed to do and that should be reward enough. I was protecting people who went in to worship God,. Maybe that assisted in whomever’s intervention to say, ‘No — you helped. And we’ll help you,'” he said.

The Sikh shooting didn’t kill Officer Murphy, but with 12 of the 15 bullets making contact with his body, he is lucky to be alive (3 of the bullets his his protective vest). As far as the shooter—white supremacist Wade Michael Page (he committed suicide)—Murphy says he gives barely any thought to him at all.

“My forgiveness has no bearing on the matter and honestly I give him the least amount of thought possible. I don’t want to give him any more power than he already took. I just don’t. He doesn’t deserve it,” said Murphy. And he’s absolutely right.

Officer Murphy remembers the Sikh shooting clearly, and while it was a scary situation, he remarkably and admirably made it through.

Previous: Sikh temple presidents slam plans for a new gurdwara for ‘future generations’ in the town
Next: Sikh NGO demands from FBI to accept Wisconcin Gurdwara shoot out as an act of hate