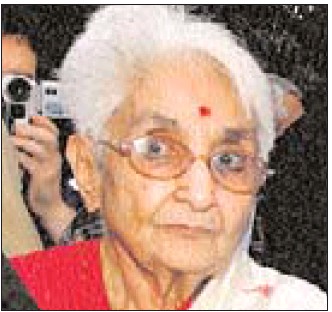 She fought all her life for freedom, women and the deprived

Comments Off on She fought all her life for freedom, women and the deprived 150 Views

Kanpur, India: Captain Lakshmi Sehgal, the warrior-doctor associate of Netaji Subhash Chandra Bose, fought tirelessly first for the country’s freedom and then for the poor.

She also championed women’s rights and battled against injustice and the irrationalities of narrow and divisive thought.

Sehgal, 97, was relentless as well. She was preparing to go to her clinic in Kanpur on Thursday when she suffered a cardiac arrest at home. She never skipped going to her clinic and did not charge patients, who got free medicines too.

When the Left fielded her in the 2002 presidential election, Sehgal’s primary concern was her patients would suffer. She lost the election to APJ Abdul Kalam, but during the race, she found time to help patients over the phone.

Her courage is also legendary. During the Sikh Genocide in l984, she stood fearlessly before screaming mobs on the streets of Kanpur. Not a single Sikh was attacked in the crowded Gwaltoli area where her clinic stands.

In l940, she left Chennai for Singapore. Drawn towards the anti-British struggle in Singapore, she played an active role in the India Independence League.

In l942, the British surrendered Singapore to the Japanese. Netaji arrived in Singapore on July 2, l943, and spoke of his determination to raise a women’s brigade of the Indian National Army, the Rani of Jhansi Regiment, to fight for Indian independence.

She met Netaji on July 5 and accepted his proposal to lead the regiment. The next day, she closed her clinic.

She was given the rank of Colonel — she remained Captain in public memory, though – and was active on both the military and medical fronts.

She was captured and brought to India on March 4, l946. The British soon freed her, aware that her detention would trigger public outrage.

In March 1947, she married Colonel Prem Kumar Sehgal, who was also a leading light of the INA, in Lahore. They settled in Kanpur, where she plunged into her medical work.