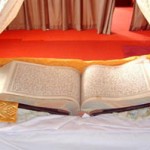 Amritsar, Punjab: Foreign-based new generation of Sikhs and people from other religions having faith in Guru Granth Sahib will hardly have any problem in comprehending the meaning and message in the holy book as the SGPC has initiated work on preparing the first “authentic and widely-accepted” annotative version (Teeka) of Guru Granth Sahib.

The annotative version of Guru Granth Sahib is being prepared under the guidance of renowned Sikh scholars. The project was initiated by SGPC chief Avtar Singh at Guru Granth Sahib Research Centre in the Golden Temple complex here today.

Several Sikh organisations, taksals, panthic organisations and Sikhs based in different parts of the world have been asking the SGPC to come out with an “authentic” annotative version of Guru Granth Sahib for an easy comprehension of the message of the Gurus. Upon completion of the first phase of the “Teeka”, it will be translated in English, Russian and French languages. “The translated versions will be helpful in sending the message across the world. It will be particularly helpful to the young generation of the Sikhs, who are educated in different countries and the scholars who were seeking to comprehend message enshrined in Guru Granth Sahib in a better way,” said Avtar.

He said to supervise the project, the SGPC had appointed former Akal Takht Jathedar Giani Joginder Singh Vedanti and former secretary of the SGPC’s Dharam Parchar Committee Waryam Singh as chairman and director of the research centre, respectively.