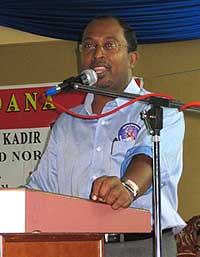 Singapore : ‘Although the Sikh community in Malaysia is small, their support and contributions to nation-building are very important,’ said Perak Chief Minister Zambry Abdul Qadir.

He said that despite being a minority community, the Sikhs had never allowed their small number to dampen the spirits to make it big in the country.

Malaysia has about 1,26,000 Sikh community with around 28,000 in the Northern peninsular state of Perak.

”Since the arrival of the first batch of 100 Sikhs more than 100 years ago in Perak, the Sikhs have laid their lives, toiled in sweat, piqued their intelligence and flexed their muscles for the country,” the Malaysian national news agency Bernama quoted the chief minister as saying.

”So much has been given by the Sikhs to Malaysia, their new motherland,” he observed at the Sikh Fellowship Dinner organised by the Union of Perak Sikh Organisations (UPSO) at the Red Crescent Hall here last night.

”From their early involvement in the defence services, especially the police force and the army, they have evolved their role and responsibilities,” he said.

On behalf of the Barisan National or the multi-party ruling coalition state government, he appreciated the Sikh community for enriching the heritage, culture, demography and the social fabric of the country especially that of Perak, with their qualities and contributions.

”The state government is aware that the Sikh community is not devoid of problems. Issues like hardcore poverty, crime, substance abuse, lack of opportunities in acquiring skills, rising figure of single mother among others, faced by the Perak Sikhs need to be addressed properly and promptly,” he said giving an assurance of the state government’s support and help.

UPSO chairman Dheer Singh said issues like education fund, women development, pending citizenship, single mother welfare, poverty and financial allocation for the community had been highlighted to get the attention of the relevant authorities on the plight of the Sikhs.

”In a quest to bring drastic changes in our mindset, the Sikh community must first of all become united in a single entity. This entity must be a channel between the community and the state government.” he said adding ”Every Sikh organisation so often claims to be the sole representative of the Sikhs and have presented themselves as such to the government and other authorities and bodies. We are aware that it poses an extremely difficult position for the state government to identify the right body to represent the Sikh agenda.”