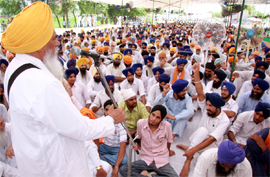 Jidda, Bathinda: Amid the ongoing Dera-Sikh row, various hardliner Sikh organisations assembled at a joint platform today and decided to launch a fresh move against the Dera Sacha Sauda sect.

Under the leadership of Balwant Singh Nandgarh, Jathedar, Takht Damdama Sahib, Talwandi Sabo, the meeting, in the shape of a Diwan Hall, was arranged at village Jidda. The village was selected to mark their protest as the police had recently rounded up some Sikh women, who were going to oppose a Dera congregation in Jidda village.

Balwant Singh Nandgarh, while addressing the gathering, said, “If the state government does not control the police and stops shielding Dera followers who are anti-Sikh, peace in the state will collapse soon.”

Lashing out at the government, Nandgarh said, “It is our bad luck that the Sikh oriented ruling party has now adopted anti-Sikh policy just to secure Dera votes.”

Accusing the in-charge of CIA staff, Bathinda, of committing atrocities against Sikhs in false cases, Nandgarh said, “I declare that if that officer does not mend his ways, he will soon be shot dead by some ‘Real Sikh’.”

At the meeting, hardliners framed two committees. A five-member committee, which comprising Ajit Singh Bhangu, Niranjan Singh Premi, Rajinder Singh, Jatinder Singh and Charan Singh, is to investigate the role of the Sikhs arrested in connection with Dera follower Lily Kumar’s murder in Mansa. They will have dialogues with senior police officials.

The second committee of seven members would give a representation to the Akal Takht for issuing fresh edict (Hukumnama) against the Dera. Jasbir Singh Rode, Harnam Singh Khalsa, Karnail Singh Peer Mohammand and Gurcharan Singh have been appointed its members, while three more members are yet to be included.

Speaking about the committees, Nandgarh said, “We have formed committees as we have doubts that the police killed the Dera follower Lily Kumar just to book innocent Sikhs in the case. Further, the Akal Takht Jathedar had earlier asked us for a ceasefire on the condition of issuing a fresh Hukumnama against the Dera after Baisakhi, but it is too late now.”

It may be mentioned that despite being called on the stage, Daljeet Singh Bittu and Baljeet Singh Daduwal refused to address the gathering. However, many of the hardliners delivered blunt speeches against the state government, police and Dera Sacha Sauda.

It may be mentioned that all the roads leading to the village were cordoned off by the police that was present in large numbers. Check points had been set up at various places. Police officials even searched the vehicles of some of the hardliners moving towards the stage.