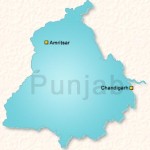 Amritsar, Punjab: Eminent citizens of the state have urged the Union government to review the blacklist which has banned several Punjabi NRIs from visiting India. “There should be an urgent and objective review of the cases of Punjabi NRIs blacklisted in the 1980s and debarred from visiting the country,” said former engineer HS Jatana.

“The period of the 1980s was of grave concern to every well-meaning Indian, but many NRIs were blacklisted on the basis of suspicion and their offence remains unsubstantiated,” said Jatana. “All of them have family members and relations in India and would like to visit them for social and other functions. Not being able to visit and join family for functions is very traumatic,” said Amrik Singh Gill, former agriculture expert to governments in many countries.

“They are denied visa to visit India because their names figure in the black list of individuals. No other reason is given for denial of visa to them. It is arbitrary, irrational and unjustifiable refusal, a violation of their human rights,” said Gill.

There was an urgent need for the Union government to review the blacklist and remove the names included in the list on the basis of suspicion and without evidence, he added. “They must review the black list,” said Sqn Leader SS Walia (retd). “Most of these cases have suffered an unmerited emotional trauma all these years. Reviewing such cases will be legally, socially and politically a move in right direction,” said AS Bains, another notable.

“The Union government must come out with a working plan to remedy the situation,” said Gurcharan Singh and RS Preeti, social activists.

“Since the 1980s, time has changed for the better; so should the approach of the Centre to this humane issue. It calls for alleviating pain and hurt inflicted on the blacklisted individuals without proving their offence, if any,” said Gill.

Previous: Half term sees Badal govt talk big only
Next: 56 riots-hit families get relief after 25 yrs