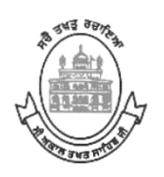 Amritsar, Punjab: Finally the Sikh political throne the Akal Takht (the supreme body of Sikh people), has issued a Hukamnama (Ruling) that the Sikhs Guru, Guru Granth Sahib will not be permissible in any locations other then Gurdwara’s

Sikh in Britain have been campaigning for this ruling for many years. Young Sikhs have worked with families around the country to ensure weddings only take place in Gurdwaras and not in marriage places.

Now the Sikh community all across the world will not carry ‘Guru Granth Sahib’ (religious scripture of the Sikhs) to marriage palaces.

The key reason for not carrying the Holy Scripture in public places is that often people indulge in the consumption of non-vegetarian food and do not remove their footwear on the occasion of marriages in hotels or restaurants.

Thus, in order to maintain the piousness of ‘Guru Granth Sahib’ and to give due respect to the scripture, its shifting from one place to another is prohibited.

Giani Gurubachan Singh, jathedar of Akal Takht, said that it requires proper norms to be followed by the requisite members of the Sikh community whenever ‘Guru Granth Sahib’ is to be carried from one place to another.