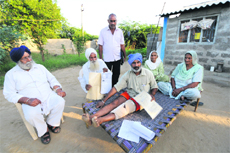 Bhuj, Gujarat: The friendship that existed between local people and Punjabi farmers settled here for more than five decades was shattered on October 8 when armed goons of a land mafia opened fire and beat up four members of a family peacefully tilling their land in Loriya village.

To add insult to injury, only eight of the over 16 armed assailants were arrested after a hue and cry was raised by the well-knit Punjabi community.

That the attackers enjoyed political patronage was common knowledge and was proved when nothing was done by the authorities to stop their forcible dispossession of the land legally owned by the family since 1965.

The incident has not only sent shock waves among the Punjabis, but has also put a question mark over the cordial relations that have been the hallmark of Kutch people’s hospitality.

Loriya village has become a one-stop place for the Punjabis settled here since they were invited by former PM Lal Bahadur Shastri to settle down along the Indo-Pak border that was undefended then and was largely inhabited by Muslims who had families on both sides of the border.

As visitors express their sympathies with injured Jaswinder Singh and his aged mother and father, they also exchange views about the next line of action in the wake of this provocation and the impassive attitude of the authorities concerned.

Jaswinder’s mother Balbir Kaur is in tears as she shows the blood-stained clothes of her son to a Tribune team. “My nephew Amandeep and two others were also hurt and have been sent to recuperate in our village in Barnala,” she said. The family points out that their patriarch Harnam Singh (82) was among the first allottees who came and settled here. The grit and fire in the sprightly man is evident even today as he brandishes the original allotment letter for 20 acres and vows to fight for his right.

Lachhman Singh and Jasbir Singh, who have been spearheading a movement to protect the land of farmers, said it was not the outcome of the envy of the local people, but a result of the land mafia’s greed to usurp the farms of Punjabis.

Previous: Nobody investing in Punjab as Badals are investing outside
Next: Sikh Group to protest against Rahul Gandhi during his Punjab visit