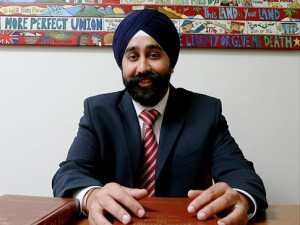 Hoboken, NY: President Obama was his inspiration. It was after Obama was elected the United States’ first black President that Ravinder Singh Bhalla decided Hoboken was ready to elect its first Sikh councilman. “That election made me believe the country has reached a phase where qualifications matter more than race,” said Bhalla, 36, who, according to the Sikh Coalition, is one of just two Sikhs holding elected office nationwide. Bhalla ran on acting Hoboken Mayor Dawn Zimmer’s ticket and was elected councilman at large by a wide margin in June, taking office July 1.

He received the most votes of 11 other candidates — despite the fact that Hoboken’s registered voter population is less than 1% Asian and the city is home to only about 10 Sikhs, including his wife, Navneet, a human rights lawyer, and their 2-year-old daughter, Arza.

“I think residents are looking for honest, competent and professional individuals in government, and I think that desire supersedes other considerations such as race, religion and gender,” Bhalla said.

A native New Jerseyan and a civil rights attorney, Bhalla first became involved in local politics in 2005, when he successfully represented two Hoboken council members in a challenge to a lawsuit by then-Mayor David Roberts, who was trying to force the council to pass his budget.

“It gave me a better sense of what the issues were on the local level,” Bhalla said. “The city council’s refusal to pass what they saw as an underfunded budget and the mayor’s attempt to force them to pass a budget they didn’t believe in gave me an intimate look into the intersection of law and politics at the local level.”

Bhalla has also fought to advance Sikhs’ rights. He won a battle to have a Sikh NYPD traffic officer reinstated after he was fired in 2001 for refusing to remove his turban and trim his beard, both forbidden by the Sikh religion.

That case helped pave the way for the Army’s first acceptance of a turbaned Sikh recruit in 23 years, announced last Friday.

In 2002, Bhalla spurred a federal prison policy change after filing a complaint because guards had ordered him to remove his turban for a search while he was visiting a client at Brooklyn’s Metropolitan Detention Center.

Now, visitors to those facilities can’t be required to remove head coverings worn for religious purposes “without probable cause,” he said.

Bhalla credits his father, Ranbir, an India-born inventor with a Ph.D. in physics from Penn State University who “came to the U.S. with less than $50 in his pocket,” with helping instill in him the importance of not compromising his religion to fit in.

In West Paterson’s public schools, Bhalla’s turban made him a frequent target of bullies, but he still played Little League and tennis, earning an all-state ranking in high school. “I saw it as an equalizer,” the avid Yankee fan said. “I really felt like on the playing field, if you knew how to pitch or hit, people respected you.”

Similarly, he found that after participating in locally televised debates with the other council candidates, he won respect for his performance.

“After the debates, people would come up to me in the streets and say, ‘You were the only person out there who made any sense,’ ” recalled Bhalla, who has degrees from the University of California-Berkeley, the London School of Economics and Tulane University. “The debates helped break a perception barrier between appearance and substance.”

Previous: 'Religion does not come into it'
Next: Sikhs who own Subway shops in Lehigh Valley Airport settle suit