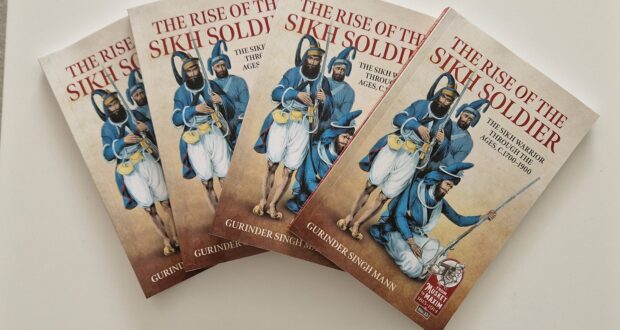 THE RISE OF THE SIKH SOLDIER

The book is unique in that it provides insights into the following:

1) The Sikh Misls were a powerful set of warriors who were able to challenge not the Afghans and Mughals with major success.

3) Whilst the Empire recruited European Mercenaries, the Sikh also had many innovations which surpassed many people’s expectations.

4) The book shows Sikh positions on the Anglo-Sikh Wars maps included. These are rarely depicted.

5) Images include relics and artefacts from various Museums and private collections, some published for the first time.

6) Inclusion of female figures Sada Kaur and Sahib Kaur which highlight their bravery and astuteness in politics and warfare.

7) Unknown campaigns of the Sikhs in the colonial period in Africa, Europe, and as well as South Asia decades before World War 1 and World War 2.

The following key people are highlighted

The book is available from the leading UK Military publishers, Helion and Company: www.helion.co.uk and on several Amazon websites. USA customers can buy direct from Casemate USA.

About Gurinder Singh Mann
Gurinder Singh Mann is a leading Sikh historian and heritage consultant based in the UK who has for over twenty five years prominently promoted Sikh History and Heritage in the UK and throughout the world. He is the author of three books one published with Oxford University Press. Gurinder has researched and discovered many Sikh artefacts linking to Anglo Sikh history. He has appeared on radio and TV, including the BBC, (Celebrity Antiques Roadtrip, BBC World Service) ITV and other channels, giving his views on heritage and theological matters.

He curated the exhibition, Anglo Sikh Wars: Battles, Treaties and Relics (2017), to great acclaim, which took place at Newarke Houses Museum in Leicester. He is presently making historical objects come alive with the Anglo Sikh Virtual Museum, through his organisation, the Sikh Museum Initiative. This is together with project managing the installation of a Sikh Statue in the UK.