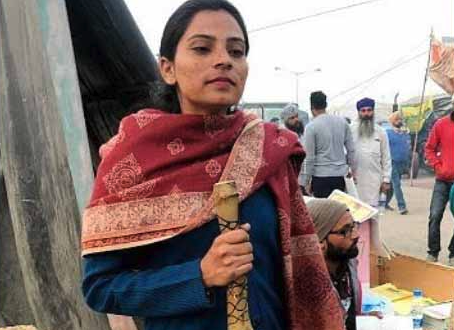 Comments Off on Who is Nodeep (Navdeep) Kaur? 5,089 Views

A tweet by Meena Harris in support of labor rights activist Nodeep (Navdeep) Kaur sparked a social media debate on her arrest. Ms. Kaur, who was arrested on January 12 and is still in police custody. The local court had on February 2 denied bail to her in the case. On Feb 13th, Indian court playing games of giving bail in one case; but also ordered her to remain in jail for another case.

Back in 27 November, 2020, The Supreme Court of India observed that criminal law cannot become a “weapon for the selective harassment of citizens”. Nodeep’s sister had alleged that she was beaten up by the police, and she had injuries on private parts. However, she denied media reports alleging that Nodeep (Navdeep) was sexually assaulted. There is no doctor or medical review/checkup of her since she is in jail.

Nodeep (Navdeep) Kaur is a Dalit and labour rights activist. In India’s millennia-old caste system, Dalits fall entirely outside the structure. Once pejoratively referred to as “untouchables” due to the hereditary nature of family occupations passed on from one generation to the next, over centuries Dalits have remained oppressed by tradition and the rest of Indian society. Caste Discrimination and humans rights abuses against Dalits in India is common. Many Dalits adopted Sikhism as religion because of their religious preaching to see all equal. It is against basic Sikh principle to discriminate against anyone based on religion, sex, caste, nationality, color, creed…

Sikhism teaches that people of every race are the same and should be treated equally:

From one clay has the Creator made countless shapes, sizes and colours. Neither are the vessels badly made or does the Creator lack any skill.

Nodeep (Navdeep) Kaur is a member of a little known organisation Mazdoor Adhikar Sangthan (MAS) emerged at the protest site of farmers on December 6th. She was present at the Singhu border to echo the complaints of the workers of Kundli Industrial. Initially they reached the site with hopes that their pain too would be heard along with that of the farmers. However, after they came to know the pains and sorrow of farmers, they raised their voice in support for the farmers against the new agri laws and are ensuring the participation of laborers in farmer protest.

Nodeep (Navdeep) Kaur is still languishing in jails of Haryana because of her strong will to raise the peaceful voice against the non-payment of salaries and harassment by employers (Industrialist). It has been reported when she decided to participate in the democratic part of the protest, she was fired without pay.

Several Indian-American protests were held in support of the farmers, with rallies being held outside Indian consulates in San Francisco, Chicago, Indianapolis, New York City, Houston, Michigan, Atlanta, and Washington, D.C. A rally of over a thousand Indian Americans was also held in Detroit,and a car rally was held in Fort Wayne. Several American Congressmen from both the Republican and Democratic parties voiced support for these protests, including Josh Harder, TJ Cox, Doug LaMalfa, and Andy Levin. In December 2020, seven Congresspersons wrote to the Secretary of State, asking him raise the issue of the farmers’ protests with India.