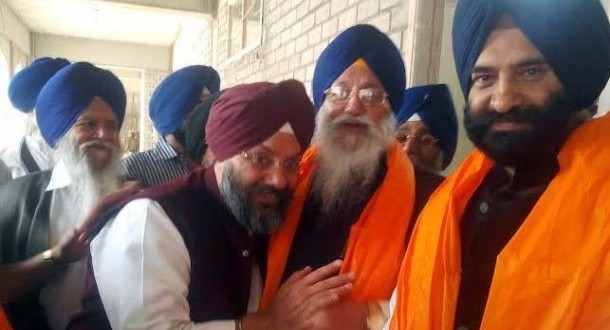 SGPC took control of Patna Sahib board from Sarna group

Comments Off on SGPC took control of Patna Sahib board from Sarna group 1,065 Views

Widening its control in the religious arena, the SAD today succeeded in wresting the power at Takht Sri Patna Sahib Management Board from SAD (Delhi) with SGPC chief Avtar Singh Makkar getting unanimously elected as the new board president in the mid-term poll of the office-bearers.

During the election held under the supervision of the district judge, eight members owing allegiance to the SAD were present as against only five out of the seven members of the rival camp. Makkar’s name was proposed while the other faction could not propose any name. Makkar was declared elected unopposed.
Shailender Singh was elected senior vice-president, Bibi Kamaljit Kaur junior vice-president, Tarjinder Singh general secretary and Mahinder Singh Chhabra secretary.

The SAD won the elections as it managed to win over the support of a few members from the rival camp. Chhabra was the secretary in the first half of the board’s term too.

Sources said the eight members supporting the SAD were first brought to Chandigarh from where they flew to Patna for today’s meeting. Outgoing Board chief RS Gandhi formally handed over the charge to Makkar. Among the members conspicuous by their absence were former DSGMC chief Harvinder Singh Sarna and Chief Khalsa Diwan representative Jaspal Singh.

After getting elected, Makkar underlined his priorities, stating that Takht Sri Patna Sahib needed to be developed at a massive scale and he will focus his efforts in this direction. He said they will also be making grand preparations for celebrating 350th birth anniversary of Guru Gobind Singh in 2017.

SAD (Delhi) chief Paramjit Singh Sarna expressed apprehensions that with the SAD gaining the control of the Board, “Sikhism may witness a decline as it did under their rule in Punjab”.