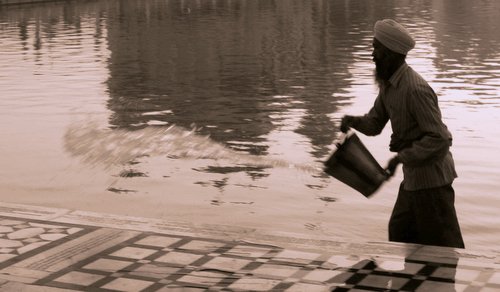 Amritsar, Punjab: Recently SGPC seems to be finding on the wrong side on every panthic issue. This suddenly started happening after NRI’s started strong agitation against Badal party and his friends visiting North America. SGPC under control of Akali Dal Badal now starting to make anti-panth decisions.

Some of their decisions:

The SGPC’s alleged move to provide only a limited number of buckets for cleaning the ‘parikarma’ of the Golden Temple has triggered resentment among the Sikh community. Scores of devotees converge at the holy shrine in the afternoon daily for cleaning the ‘parikarma’ for which they have kept buckets in an adjacent room. However, when they reached there today, the SGPC guards deployed outside the room reportedly didn’t allow them to take buckets while stating that they “waste a lot of water” and they could be provided only 10 buckets.

Later, the irate pilgrims approached Darbar Sahib Manager Partap Singh, who increased the number of buckets from 10 to 20. However, Sarabjeet Kaur and Manjeet Kaur wondered as to how the devotees would be able to perform ‘sewa’ with such a less number of buckets.

They sought the immediate intervention of SGPC chief Avtar Singh Makkar over the issue. Similarly, Kartar Singh said the Sikh Sangat could not be stopped from performing ‘sewa’ at the holy shrine. On the other hand, SGPC additional secretary Diljeet Singh Bedi said he was not aware about the matter.