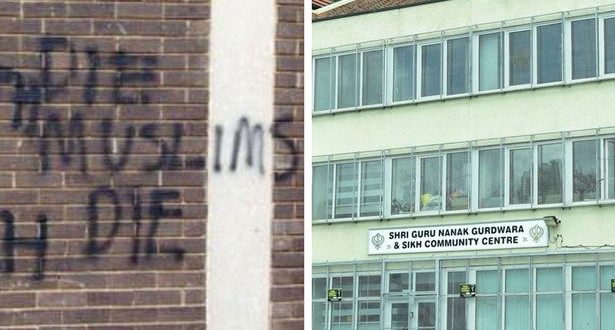 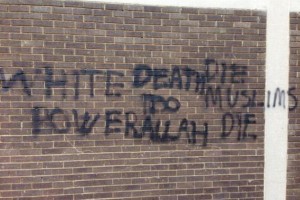 UK: Threatening graffiti sprayed onto the outside wall of the temple included the phrase white power as well as religious-themed profanity

Police are now investigating the vandal attack on the temple on Allensway.

The threatening graffiti sprayed onto the outside wall of the temple earlier this week included the phrase white power as well as religious-themed profanity.

It also targeted Muslims – despite it being a Sikh temple.

Peter Brennan, of the Village Park Residents Association (VPRA) reported the graffiti to Stockton Council after being shown it by a fellow committee member from the temple.

He said: This is absolutely disgusting – people need to be aware of this sort of madness.

The vandals were obviously ignorant but the hate was real.

This attack in no way reflects the warm feelings felt towards the Sikh community in Thornaby.

Mr Brennan praised the speedy response from Stockton Council in getting the graffiti cleaned off.

Cleveland Police are investigating the vandalism and are appealing for any witnesses or anyone with information to contact them.

As reported, on Friday, August 14, at about 3pm a woman entered the same Temple and stole a trolley containing food and clothing.

She is described as white with long blonde hair which was tied back in a ponytail and she was wearing a long black coat and black trousers.

The woman left the temple pushing the trolley in the direction of Leahope Court in Thornaby.

2015-09-03
SSNews
Previous: Ludhiana and Amritsar are India’s top road accidents
Next: Radical party of India wants to impose limit of having children in minorities