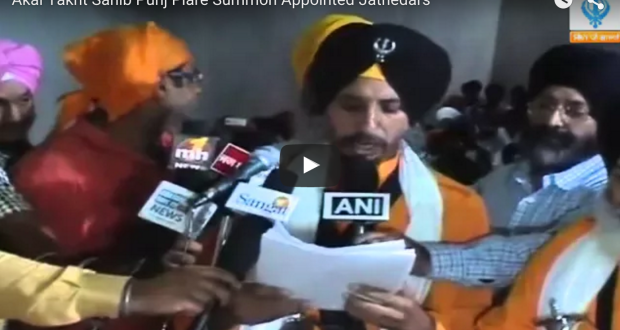 Amritsar, Punjab: The Shiromani Gurdwara Parbandhak Committee (SGPC) executive body may be indecisive on suspending them for summoning all five Sikh high priests but the defiant Panj Pyaras of the Akal Takht will go ahead with their meeting to decide the fate of the jathedars who on September 24 pardoned Sirsa-based Dera Sacha Sauda controversial head Ram Rahim in a 2007 blasphemy case.

“We will wait for the jathedars at the Akal Takht till 10am on Friday,” Satnam Singh Khanda, one of the Panj Pyaras suspended along with Satnam Singh, Major Singh, Mangal Singh and Tirlok Singh, told the media on Thursday here. Frustrated SGPC president Makkar suspended them on Wednesday, hours after they had summoned the high priests.

Badal supported SGPC and Jathedars states that the ‘Panj Pyaras’ are only to perform the ‘amrit sanchar’ (baptism) ceremony and leading ‘nagar kirtans’ (religious processions) on important occasions. The Panj Pyaras had claimed they were under tremendous pressure from the ‘sangat’ that had not liked the pardoning of the Sirsa dera head. Sikh historians bluntly disagreed with Badal backed SGPC chief’s drastic action against Panj Piyarays.

Sources said the SGPC might not allow the Panj Pyaras to meet.

2015-10-22
SSNews
Previous: Sikh for Justice meeting with the US Commission on International Religious Freedom
Next: Sikhs believes in true democracy: Wants People’s panel to look into Bargari desecration