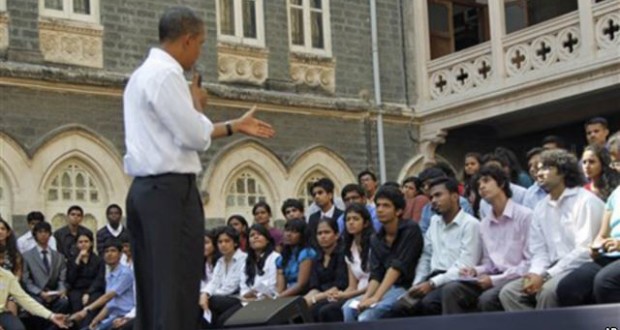 New Delhi, India: US President Barack Obama weighed in on one of India’s most sensitive topics as he wound up a visit on Tuesday, making a plea for freedom of religion to be upheld in a country with a history of strife between Hindus and minorities.

An online White House petition of 100,000 signatures asking US President Barack Obama to raise the issues of Sikh community during his India visit. The months of hard work by Sikhs for Justice finally paid off when Obama warned India not to stray from its constitutional commitment to allow people to freely “profess, practice and propagate” religion. “India will succeed so long as it is not splintered along the lines of religious faith, as long as it is not splintered along any lines, and it is unified as one nation,” he said in a townhall address to mostly young Indians.

Obama’s speech, after three days in New Delhi aimed at cementing a strategic partnership, was widely interpreted as a message to Prime Minister Narendra Modi and his Hindu nationalist BJP/RSS, whose rise to power emboldened activists to declare India a nation of Hindus. He made no direct reference to Modi, who was banned from U.S. travel for nearly a decade until last year because of his deplorable human right history.

A Sikh rights group has filed a lawsuit this week asking a federal court here to designate RSS as a “foreign terrorist organisation”. The federal court in the Southern District of New York issued a summons for US Secretary of State John Kerry to respond to the suit within 60 days.