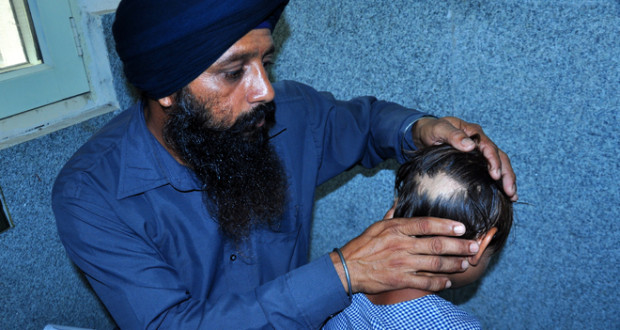 Panchkula, HR: A six-year-old girl student of Class II at Government Primary School, Balouti (Morni), had to face the wrath of her teacher for not being able to read a story in Hindi.

Irritated, the teacher allegedly pulled her hair as a result of which a lock of her hair came off. On getting a complaint from the girl’s father, Deputy Commissioner Vivek Atray directed the Tehsildar and the District Elementary Education Officer to probe the matter at the earliest. The head teacher of the school, Kamal, however, denied the allegations. “The child was only slapped as she was not studying properly. They are making an issue out of it. The teacher didn’t even touch her head..”

The victim’s father, Malkeet Singh, alleged that his daughter’s teacher, Sunita, first beat her up and then pulled her hair in a brutal way. Malkeet Singh is a resident of Balouti.

“I came home at night after work and my daughter was crying. When I asked her the reason, she showed a portion of her head, which was bald, and said it was hurting badly. She then told me that she was asked to read a story in Hindi which she was not able to do properly following which the teacher thrashed her,” said the child’s father. The girl’s father took her to the General Hospital in Sector 6 for treatment.

2015-09-16
SSNews
Previous: Radical party of India wants to impose limit of having children in minorities
Next: Giani Gurbachan Singh says that Panj Piyares are ordinary granthis allowed to do small duties