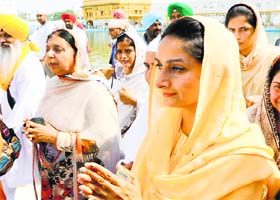 Comments Off on Will mitigate farmers’ woes, says Harsimrat 470 Views

Amritsar, Punjab: The newly sworn-in Union Food Processing Industries Minister, Harsimrat Kaur Badal, today said that diversification and food processing was the need of the hour. “Punjab is in my heart. I am aware of the farmers’ woes and will take all necessary steps to redress their problems,” said Harsimrat, while evading queries on the 1984 anti-Sikh genocide, Arun Jaitley’s defeat from Amritsar and the strained SAD-BJP ties.

Her husband, Deputy CM Sukhbir Singh Badal, too was in the city. But he didn’t accompany her to the Golden Temple. Talking to mediapersons after paying obeisance at the shrine, Harsimrat said it was wrong to say that the SAD-BJP had not fared well in the Lok Sabha elections.

“We have got one seat more than the previous Lok Sabha elections,” she said, while refusing to comment on the blame game between SAD and BJP leaders over the alliance’s poll performance.

Asked if the SAD would be able to get justice for the 1984 genocide victims, Harsimrat seemed non-committal. “It is with the Almighty’s blessings that I have become a minister. I will work under the gidance of the the supreme being,”she said.

On agenda as Food Processing Industries Minister, she said: “My priorities are clear. A lot of foodgrain is being wasted. Diversification coupled with food processing is the need of the hour. Besides adding value to farm produce, we should ensure the consumer gets the same at a reasonable cost.”

On Jaitley’s defeat, she said it was an opportunity that Amritsar had lost. She said she had met Jaitley recently and the latter had assured her that he would remain in touch with Amritsar, keep his house in the city and work for the city’s development. State ministers Bikram Singh Majithia, Gulzar Singh Ranike, former MPs Balwinder Singh Bhunder and Paramjit Kaur Gulshan, former SGPC chief Bibi Jagir Kaur and other leaders accompanied her to the Golden Temple.

She was honoured with a ‘siropa’ and a shawl by SGPC executive member Rajinder Singh Mehta. At the Durgiana Mandir, Harsimrat was accorded a traditional welcome by the temple’s managing committee general secretary, Ramesh Sharma. Harsimrat paid homage to the martyrs at the Jallianwala Bagh and offered prayers at Ram Tirath Temple.